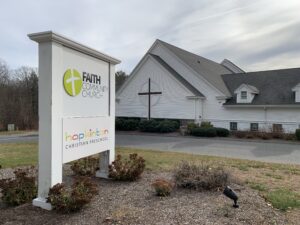 In the year 1724, when the United States was still called the United Colonies, a nondenominational church was formed in Massachusetts.

Pastor Mike Laurence has been part of that expansion. After becoming pastor in 1990, he was there when the church moved in 1997 from its downtown location to its current spot on East Main Street. Soon after, the building required some upgrades — prompted first by age, and later by a substantial flood that damaged a large part of the building.

With the goal to not only repair but also improve, the organization — funded by generous donations and flood insurance compensation — invested $1.75 million into renovations, and local builders and contractors went to work.

Among many enhancements were a new child ministry, new technology at the Worship Center (including a new sound system, video and LED screen), a redesigned meeting space and a cafe.

Developments that also will benefit the planet now are in the works. In partnership with a local company, the church plans to install solar panel canopies over its back parking lot to harness green energy as part of a solar collective.

Asked about the most significant benefit from all of the changes, however, Laurence doesn’t note the tangible.

“We’ve built a strong community that comes together in challenging times,” he said. “During the COVID pandemic, renovations had to be put on hold, but we managed to continue services, whether outdoors, online or with restrictions, and never missed a single one.”

That isn’t to say the church didn’t feel the impact. Faith Community Church lost a third of its staff, members of the congregation suffered anxiety and depression, and people had funerals and weddings postponed. But inspiration was found through acts of generosity and support.

“We worked with a school district to raise and donate $60,000 worth of food to residents in MetroWest and the same through churches in Madagascar for people who were starving because of coronavirus,” Laurence said. “Even amid their own fears and stress and difficulties, people stepped up to help others.”

It’s that kind of strength and resilience that is found in community, which is why Laurence believes it’s important to continue to invest in it.

“People can see tragedy turn to triumph when they have a strong community,” he said.