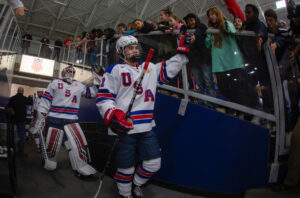 Two years ago, Sean Farrell made the decision to move nearly 700 miles away to pursue his hockey goals. That choice has taken him around the world with the U.S. National Team Development Program and allowed him to earn a chance to play hockey at Harvard after the Hopkinton native graduates high school next year.

“At first it was definitely really hard, I was homesick for a little bit when I moved out here,” Farrell said. “But I’m living with a friend and my host family is really nice, that’s helped make the transition better.”

The 17-year-old left winger has embraced an unusual path through high school and hockey. He and six of his teammates attend a local high school in Northville, Michigan, leaving school around noon every day so they can eat lunch and hit the ice for practice. Farrell finishes his studies online, in between globe-trotting to tournaments in Russia, Finland, the Czech Republic and British Columbia over the past two years.

“I think it’s really cool to see some of these places and see how people live,” he said. “Russia was a crazy experience, just seeing how different it is. In Czech and Finland it was different, too, but the people were really nice. We also had a fun time going over there.”

Farrell, who plays with the U-18 squad, will don the red, white and blue in Sweden this April at the World Championships. 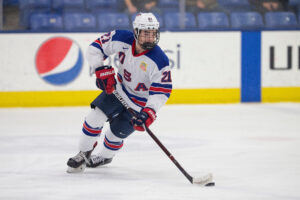 Sean Farrell, who will play at Harvard after he graduates high school in 2020, has traveled around the country and the world playing for the USNTDP program. PHOTO/USA HOCKEY NTDP/RENA LAVERTY

Farrell’s atypical high school experience has presented some challenges, as well as some great opportunities, for the rest of his family. His father, Bill, or his mother, Erica, will make a trip to Michigan about once per month, and both have been able to fly overseas to see their son play for Team USA.

“It’s been an honor, in a word,” Bill said. “It’s been hard, he went away at 15 and that’s definitely unusual, especially in our family. But it was 100 percent his decision. He knew he wanted to do it and there was no stopping him.”

The elder Farrell pointed out how close Sean is to his younger sister, 15-year-old Brooke, which added another challenge to having the family’s oldest child halfway across the country. But the difficulty of the arrangement is dulled wen the family sees Sean on the ice.

“It just blows your mind and makes you so proud to see him wearing the USA crest along with his teammates,” Bill said. 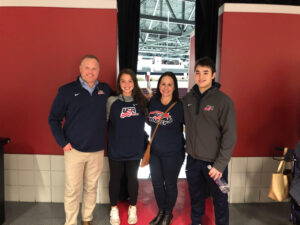 Sean Farrell (right) has a supportive family in (from left) father Bill, sister Brooke and mother Erica, who got to see him in person after a USNTDP game at Boston University.

And while most students go away for college, Sean’s family will welcome him home when he attends Harvard. Bill Farrell played baseball and football at Yale, but said he is thrilled to see Sean have the chance to play in the Beanpot, even if it’s in the uniform of his alma mater’s chief rival.

Sean totaled seven goals and 16 assists in 35 games this winter, his final year with the development program. He will age out next season, and Bill Farrell said his son will likely end up playing with a team in the United States Hockey League, a top junior ice hockey league with teams scattered across the midwest. The USHL draft takes place this spring, but Farrell has his sites set on the NHL draft. He will be eligible for the first time in 2020.

“In the future, a big goal is to play in the NHL,” Sean Farrell said. “Right now, my goal is getting ready for college and to play at Harvard. I do well in school and I enjoy most of my classes. I love the coaches there, and I think it will be a good step for me.”