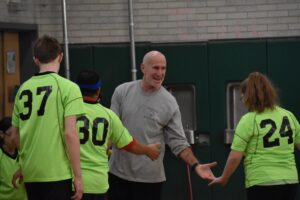 On and off the court, you can tell there’s something special about “Coach Alec” Levine, who took over as director and head coach of Hopkinton Special Olympics back in 2004 from program founder Claudia Vanderpool.

“I had recently retired after many years as director of the Hopkinton youth basketball program,”

Levine said, “and my daughter, Jackie, encouraged me to get involved in the newly formed program.”

Hopkinton Special Olympics is considered a Unified Sports program where athletes and volunteer partners play side-by-side. Partners never shoot, score or steal the ball but ensure the flow of the game and encourage athletes as they develop their skills.

“Probably more important than the athletic component is the social component,” Levine noted. “You can see the absolute joy these athletes experience playing and hanging out with their peers.”

The key to the program’s success is the tireless effort of Levine.

“He’s totally incredible,” said Hopkinton High School senior Evan Sisitsky, who has been a volunteer partner for the basketball program the past six years. “His patience and his ability to connect with all the athletes and the partners is incredible. The organization piece also, he does an incredible job of organizing it, making sure there’s enough partners, enough athletes to be able to play. Everything he does just shows much he cares about everyone in the program.”

Early on, Levine introduced softball, track and field and bowling, but basketball and soccer became the preferred sports. There are four age- specific teams made up this year of 47 athletes from Hopkinton and surrounding towns, and every Saturday afternoon there is dedicated practice time at the Elmwood School gymnasium. Many hope to participate in the Special Olympics State Games in mid-March.

Levine credits his success to the overwhelming generosity and support of the Hopkinton community and to his three fellow coaches, Gary Wheeler of Mendon, Pat Murphy of Northborough and fellow Hopkinton resident Anne Marcy, who have dedicated themselves to this program since its inception.

“This is a life-changing experience for everyone,” Levine said. “My athletes and coaches are remarkable. My team played against the Hopkinton High School fresh- man team, coached by Jay Golden, in the annual MLK Day game. It’s so amazing to see the stands filled with proud parents cheering their children on and watch the excitement in the athlete’s faces — that’s what thrills me.” 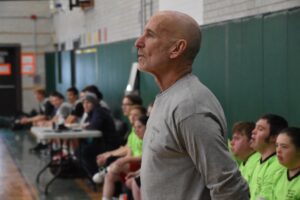 Alec Levine has run the Special Olympics program in Hopkinton since 2004. PHOTO/JERRY SPAR

Said Sisitsky: “It’s definitely one of those things that gives you perspective on what matters in life, especially in the sense of how the little things — you going and playing basketball with these athletes makes their day. When you go in there and see them smile or give you a high- five or a hug or something it really makes you feel good to know that they’re getting a lot out of it and that you’re making such an impact on them and their lives.”

Levine also has high praise for members of the Hopkinton Police Department and Fire Department, who provide incredible support, and the many volunteer partners.
“Many of the partners who start- ed with me 14 years ago have now graduated from college and gone on to work in the field, perpetuating the model of giving back and working with those who may be less fortunate,” Levine said.

This past fall, the Hopkinton Board of Selectmen and School Committee recognized Levine, who in 2010 was inducted into the Special Olympics Massachusetts Hall of Fame.

Beyond his involvement in Special Olympics, Levine’s compassion- ate and caring nature reveals itself in other ways.

In 2017, he was recognized by the United Way for nearly a decade of volunteer service with the Pearl Street Food Pantry in Framingham.

After watching a “60 Minutes” exposé, “Rock Steady Boxing,” that demonstrated how people with Parkinson’s disease benefit from a high-intensity exercise regime using boxing techniques, Levine set out to find more.

“I’ve been boxing for 14 years now,” Levine added. “It’s an incredible fitness regime, and I like sparring.”

He contacted the only three gyms in New England that in 2015 had Rock Steady Boxing programs and started volunteering. Today, there are 50 programs nationwide. Levine gathers a small group of men living with Parkinson’s and trains with them at an area gym.

For four years now, their work has built up skills in core strength, balance and coordination, stamina and muscle memory training and improved cognitive ability.

“There’s no cure [for Parkinson’s], but unbelievably, boxing seems to help slow down the progression of symptoms and offers an important social support mechanism for these guys,” Levine explained

Added Levine: “I’ve always felt everyone should do their little part. I’m just wired this way. If there’s some way I can help, I want to do my part.”