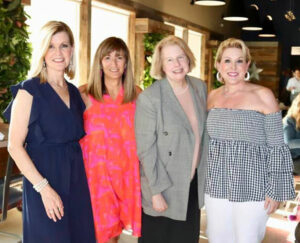 Hopkinton resident Marie Boyle is using both fashion and fitness to raise money and awareness about a “silent killer” of women — ovarian cancer.

Ovarian cancer causes more deaths each year than any other gynecologic cancer in the United States, according to the Center for Disease Control, but for many women by the time they recognize the symptoms the disease has already progressed to a late stage. Symptoms of ovarian cancer can include bloating, pelvic or abdominal pain, difficulty eating or feeling full quickly, and frequent or urgent urination — all symptoms that could be mistaken for other issues.

Although difficult to detect, if the cancer is found at an early stage, women have a 93 percent survival rate of five years, according to the Dana-Farber Cancer Institute.

In an effort to bring about more awareness about this devastating disease, and to help raise funds for researching a cure, Boyle has spent the past six years fundraising and has raised close to $50,000 for the Susan F. Smith Center for Women’s Cancers at Dana-Farber.

The fight is personal to Boyle, as she was diagnosed with ovarian cancer in 2014. After being in remission for two years and eight months, Boyle was told her cancer had returned.

“Going through everything that first time was really bad, but nothing was worse than having to tell my kids that my cancer had returned,” she said.

Boyle continues fight for herself and the thousands of other women battling this disease by continuing her mission to bring about awareness and raise funds for cancer research.

This summer, Boyle brought a little “fun” into her fundraising efforts by hosting two charity fashion shows last month. In partnership with Hopkinton’s Swoon Central and co-owners Lisa Strain and Kathy Mazur, who is an ovarian cancer survivor herself, the events featured raffles, an auction and a fashion show featuring clothing from Swoon modeled by women who are going through cancer treatments or are cancer survivors.

“It was amazing,” Boyle said of the two sold-out events. “It was so much fun and very upbeat.”

The fashion shows, which were held at Central Public House, were held in memory of Kathy Hirst and Jacquelyn Aramburu-Grady, friends of the hosts who both recently passed away from ovarian cancer.

At the end of the shows, the women had raised close to $12,000 for ovarian cancer research.

“What’s so great about this is that 100 percent of the money goes directly to Dana-Farber Cancer Center,” Boyle said.

While raising funds is an important step in eradicating this disease, raising awareness is just as important, Boyle said.

“I have had people approach me saying, ‘Why hadn’t I heard of this before?’ ” Boyle said. “We need to get the information out there. Awareness and early detection is key.”