At the July 9 Select Board meeting, Town Manager Norman Khumalo and Town Counsel Ray Miyares updated the board on ongoing issues the town has been having with Eversource, which owns the Hopkinton LNG plant off Wilson Street.

Khumalo and Miyares detailed a number of run-ins with the company, which they said has been uncooperative and dismissive of town concerns.

“What we have here is a company that is not predisposed to be a good neighbor,” Miyares said.

Among the key issues:

— Khumalo said Eversource has not been forthcoming or cooperative regarding safety concerns the town has about the plant, which was constructed between 1967 and 1974.

Most recently, in 2017 there was a problem — Eversource termed it a “thermal anomaly” — in one of the tanks that holds approximately 3 billion cubic feet of liquefied natural gas, yet the company did not notify the town about it until last August, eight months after the fact. The tank is being emptied so that the interior can be inspected.

“The fire department does lack the important information to develop effective emergency response plans,” Khumalo said. “Chief [Stephen] Slaman has gone to great lengths to at least enable and facilitate the conversation with LNG that would provide the town with the most relevant and pertinent public safety-related information. To date, the town does not have any evacuation plan for this facility [in the event of an emergency].”

— The town wants Eversource to enter into a host community agreement, which is common when dealing with large companies in the private sector, but Eversource refuses. The town was unsuccessful when it asked the Department of Public Utilities [DPU] to force Eversource’s cooperation.

“They simply said no,” Miyares said.

Miyares said the town is appealing the DPU’s decision, and that appeal is pending before the appeals court.

“The good news is we will be able to argue our case in front of a panel of three judges at the appeals court who will certainly be challenged by the tenor of the appeal that has been filed,” Miyares said. “I think the idea that the DPU simply adopted a practice or a policy of just ignoring host community agreements and not requiring them is something that at least may give the appeals court pause. We don’t know until we actually argue the case to find out how they will be. But unlike the DPU, the appeals court is more likely to take a more neutral view of things. So we have some optimism there.”

— Charles Kadlik, the town’s building inspector, denied Eversource permits for “modifications” it would like to make to the facility due to the company failing to respond to requests about how it intends to comply with zoning requirements.

Eversource proceeded to go to the DPU and ask for a comprehensive zoning exemption, which it was granted.

Brendan Tedstone, the Select Board chair, expressed concern to Miyares about the DPU’s impartiality.

“It sounds to me, the picture that you’re painting, is that we have almost a ‘good ol’ boy’ network, that they don’t care what we say, we’re going to ignore you, then we’re going to go to the state, we’re going to go to the DPU, who’s run basically by retired execs from [Commonwealth Gas] and Eversource and NSTAR and whomever, and they’re going to side with them,” Tedstone said. “That said, I hope that we can get a fair bite at the apple. My main concern as a selectman and as a person who lives in town is the safety aspect of it.”

— The contractor hired by Eversource to do work on town roads, United Civil, had some issues that forced DPW Director John Westerling to issue a stop work order.

“The contractor has really been a bad neighbor,” Khumalo said. “They have failed to secure the trenches [along West Main Street] several times, causing damage to automobiles or vehicles using these roadways. And in fact most recently they even dug up the wrong section of the road. Instead of digging up West Main, they dug up Lumber Street.”

Added Khumalo: “The point needs to be made that this kind of behavior creates serious public safety concerns. It also is very draining on town resources.”

— Eversource has filed a tax abatement request for the fiscal years 2014-15 through the present, with approximately $2.6 million in dispute over the six-year period. Three of the years are scheduled to be heard in front of the appellate tax board in September.

Miyares expressed strong confidence in Hopkinton’s case but noted, “It is unfortunately the practice of the appellate tax board to pick some number between their number and our number.” 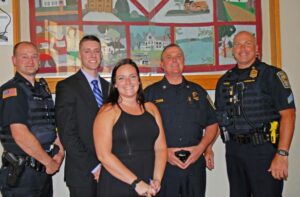 Robert Ekross was formally introduced as the town’s newest police officer at the July 9 Select Board meeting, with members voting unanimously to accept his appointment.

Ekross, a native of Grafton who majored in criminal justice and graduated with high honors from Becker College, most recently served as a full-time police officer at Fitchburg State University.

Deputy Chief Joseph Bennett introduced Ekross to the board, saying: “One of the things that made Robert really stand out is during the interview process, and even if you were to look at his cover letter, he did a lot of research on the community and he really relayed how he feels he can fit in the community based on what he sees as our values that are present and represented in our social media, in our mission statement. That’s why I really believe he’ll be a fantastic fit.”

There remains one more opening on the force that the Select Board has approved to be filled this year.

At its June 25 meeting, the Select Board addressed the need for dramatic increases in resident fees over the next couple of years to maintain stability in the sewer enterprise fund, as had been discussed at the board’s prior meeting.

The fund is facing cash flow problems due in part to a decrease in sewer flow by industrial users.

“We have to do what it takes to keep the system going, but we definitely need better research and insight for new year so it’s not a big surprise to us and to all the ratepayers,” Select Board member John Coutinho said.

After a lengthy discussion that included Norman Khumalo (town manager), Tim O’Leary (town chief financial officer), Eric Carty (water and sewer manager), John Westerling (DPW director) and members of The Abrahams Group (consultants), the board decided to approve a three-tiered sewer fee rate structure. Tier 1 is up to 10 hundred cubic feet (HCF). Tier 2 is 10.1 to 80 HCF. Tier 3 is 80.1 HCF and above.

There will be a $200 discount per year for those who receive property tax exemptions from the Hopkinton Board of Assessors under clauses of Sections 17, 22, 37 and 41 of applicable state law.

The Select Board also voted to approve a 2 percent increase in the water rate for FY20.

The Select Board voted June 25 to remove a tree on Hayden Rowe Street, a step that was required in order to install new utility poles to accommodate the new pavement design and the installation of the new traffic signal at the intersection with Chestnut Street.

DPW director John Westerling had called a public hearing on June 10 to address the removal of three trees as requested by Verizon, which is responsible for the installation of the new utility poles.

While there were no attendees at the public hearing, a resident reached out to Westerling to object to the removal of a town-owned Maple tree in front of 185 Hayden Rowe.

However, the board agreed that the tree needed to be taken down.

Planning Board seeks residents to contribute

The Planning Board is seeking individuals interested in serving on the Design Review Board and the Growth Study Committee.

The Design Review Board provides detailed review of uses and structures having substantial impact on the town, to prevent blight, to enhance the natural and aesthetic qualities of the town, to preserve the value of land and buildings and to protect and preserve the historic and cultural aspects and heritage of the town. This responsibility is undertaken via review of site plan applications and sign applications.

The Growth Study Committee aims to proactively manage growth, enable better planning for town services, identify parcels or zones that may have a significant impact on future growth patterns within the town and create plans to ensure continued use that is in the best interest of Hopkinton, and decrease the likelihood of unfriendly 40B developments.

Those interested in applying should send a statement of interest to principal planner John Gelcich at jgelcich@hopkintonma.gov or 18 Main St., Hopkinton, MA 01748. The deadline for the Design Review Board is July 19 at noon. The deadline for the Growth Study Committee is Aug. 6 at 5 p.m. For more information, visit the town website, email Gelcich or call him at 508-497-9745.