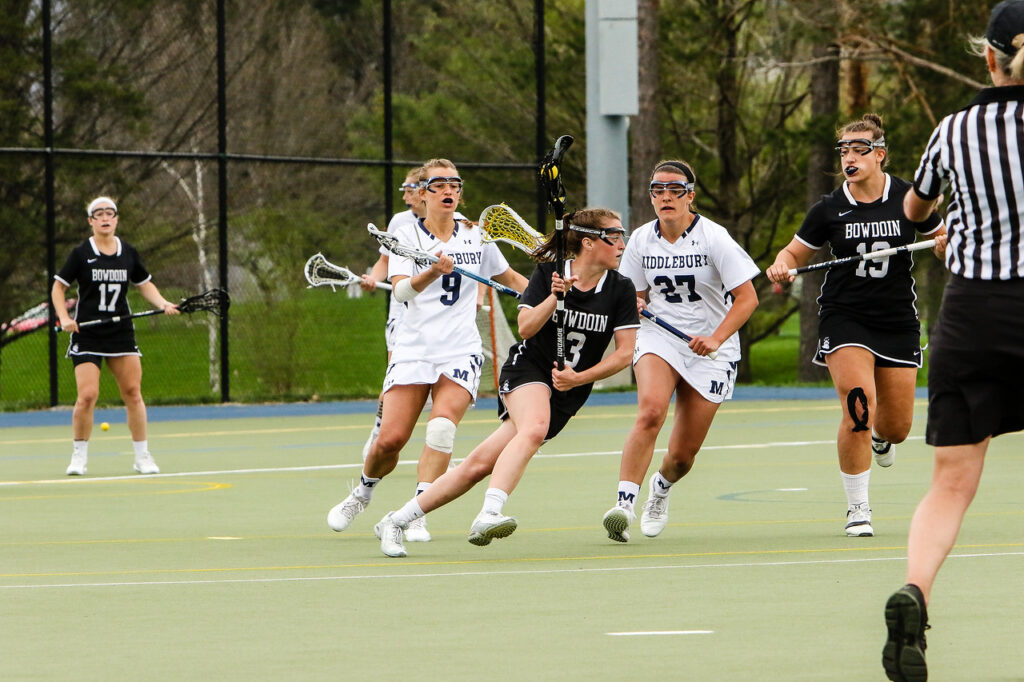 Kara Finnerty, who starred in field hockey and lacrosse at Bowdoin, saw her college sports career come to an unexpectedly early conclusion in March when the coronavirus pandemic forced the end of the NCAA spring sports season.

When Bowdoin College senior Kara Finnerty and her lacrosse teammates gathered before their March 12 game against Colby, their coach, Liz Grote, delivered a sobering and startling message.

That game, only the fourth of the season, would mark the end of the 2020 campaign. The novel coronavirus already had disrupted sports around the world and was about to end the Polar Bears’ season. For Finnerty, who grew up in Hopkinton, her career was over.

“She broke the news right before the game and it was definitely a bit jarring,” Finnerty said. “There were emotional times before and after the game but during the game, we just went all out.”

Grote said she had talked with her team in the past about wanting to be one of the last two teams to play, and it turned out to be the case. Instead of in the NCAA championship game, as they had all hoped, it was a road night game at Colby meant to give their conference foe a chance at having a senior night before the plug was pulled on the rest of the campaign.

If Finnerty had to end her career, she went out in style. The 21-year-old midfielder scored five goals, a career high, leading Bowdoin to a road victory.

“It was probably one of my best games,” she said. “My coach said I played as if I wasn’t holding anything back and didn’t have any worries. I wasn’t hesitating at all.”

Finnerty said she and her teammates considered themselves lucky in a way. They knew their season was about to end. Many teams whose athletic lives have been turned upside down by the virus were not fortunate enough to have any advanced warning or get a chance to play that “one last game.”

The Bowdoin students left for spring break and received word that they would not be going back to campus this spring. Just like that, Finnerty’s on-campus collegiate life had ended. The change was more than a little abrupt.

Finnerty starred in two sports at Bowdoin. In the fall, she was a first-team All-American in field hockey. Last lacrosse season, after she finished fourth on the team in goals with 19 and led the squad with 28 assists, she was named first-team all region (for the second straight year) and a second-team All-American.

Before following in the footsteps of two of her siblings by going to Bowdoin, she played three sports — field hockey, ice hockey and lacrosse — at St. Mark’s School in Southborough. In high school, she helped her team to a pair of ISL championships and was named a lacrosse All-American in 2016.

She also earned all-league honors and was part of league title winning teams in field hockey, was named an academic All-American, and served as a captain in all three sports.

With a resumé like that, balancing academics and multiple sports is nothing new to Finnerty. Having neither of those things on her plate has taken some getting used to.

“I certainly have found myself with a bit of a loss sometime when the whole day is open,” Finnerty said. “It’s different without that three-hour chunk of the day you’re spending playing a sport.”

Bowdoin has started up remote learning, giving Finnerty a sense of structure to her day. After 17 years of living in Hopkinton, she moved with her family to Cape Cod. Finnerty and her siblings are together with their parents, Debbie and Dave, practicing their social distancing during the ongoing public health crisis.

Coming out of St. Mark’s, Finnerty initially had her eye on Division 1 programs. But her older sister, Colleen, now 26, had played field hockey and ice hockey for the Polar Bears. Her brother, Liam, 21, graduated from Bowdoin in 2017. Kara is the youngest of four. Her oldest brother, Brendan, is 28.

The NCAA has granted all spring athletes an extra year of eligibility, but Finnerty said she does not see herself going down that road. She studied government and legal studies as well as Francophone studies at Bowdoin and plans to work at a firm in Boston this year. Sports will remain a part of her life, she said, but more likely as a coach down the road.

She said she would be hard pressed to find another program that would be as special to her as Bowdoin has been these past four years.

“I think I have had my time and appreciated that time, I don’t see myself wanting to play for another program,” Finnerty said. “We had a really special team this year and it didn’t pan out the way we wanted.”