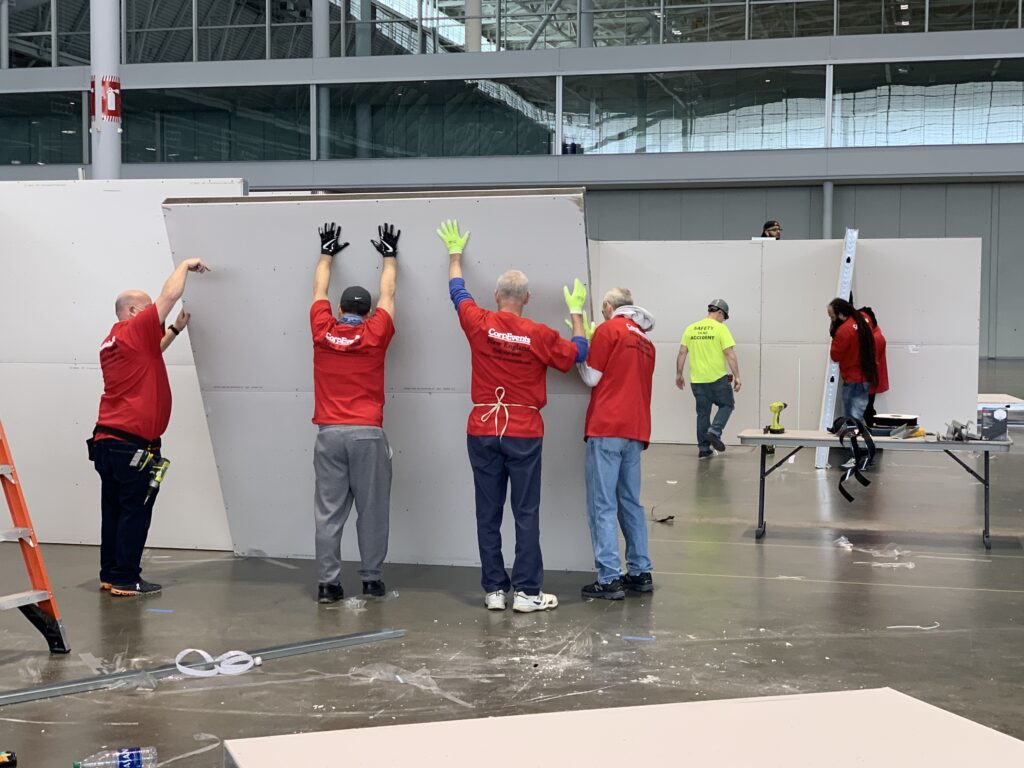 At the Boston Convention and Exposition Center, workers install cubicles to make rooms to be used to care for people affected by COVID-19.

Doing work at the Boston Convention and Exposition Center is nothing new for Hopkinton’s Bob Dobinski. The president of Corp-Events New England has aided in the construction of trade shows and other events for the past 30-plus years.

But when Gov. Charlie Baker announced that the BCEC would be transformed into a field hospital to care for the homeless and other at-risk people affected by the COVID-19 pandemic, Dobinski and the Teamsters’ Local 25 were pressed into service for a very different purpose.

“Charlie Baker announced the activation of the contract with Suffolk Construction on Friday morning and we activated men to start with the construction at 6 o’clock that same day,” Dobinski said.

With his crew working around the clock, Dobinski said nearly 500 treatment rooms had been built by midday Saturday, with a plan to construct another 500 in the next week. The vast main floor of the Seaport District convention center has been filled with white dividing walls, partitioning the space typically used for massive expositions and other gatherings.

A total of 1,000 beds are planned for the BCEC, according to Boston Mayor Marty Walsh. About half of the beds would be reserved for the homeless, with the other half to catch spillover patients from other hospitals during the anticipated surge in coronavirus cases this month. Baker has said health officials predict the number of cases in the state will peak sometime between April 10 and April 20. 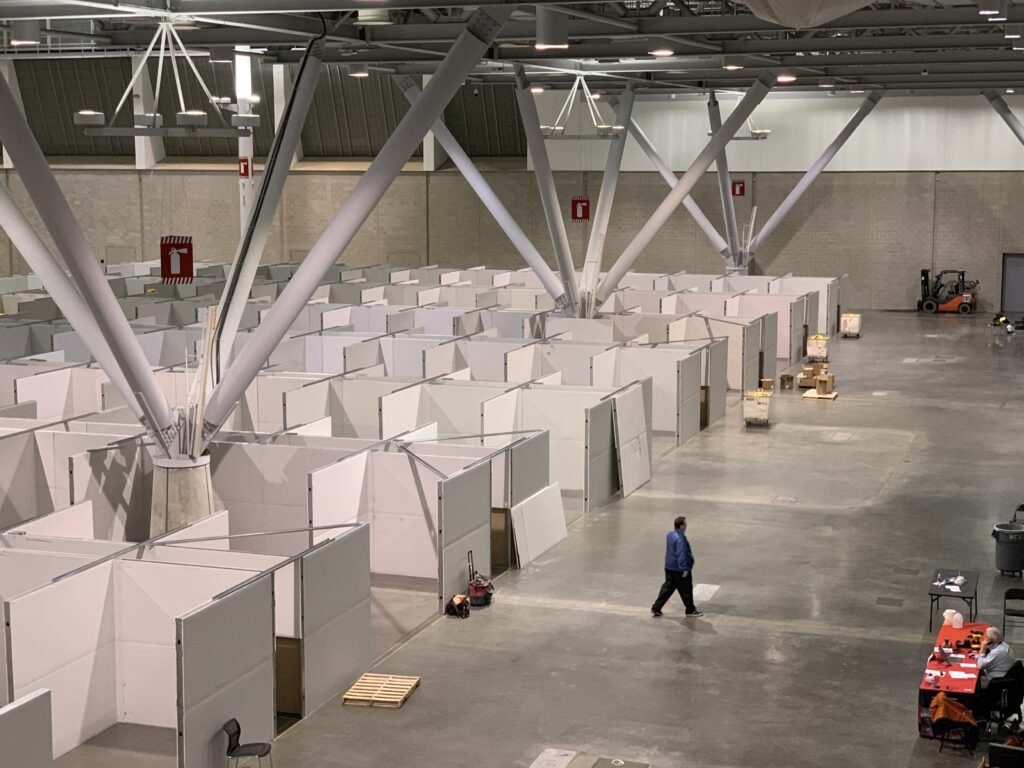 The Boston Convention and Exposition Center will server as a field hospital to care for the homeless and other at-risk people.

A similar field hospital is being built in Worcester’s DCU Center. For the Boston project, work is being done 24 hours per day. Dobinski said he was able enlist anywhere from 40 to 50 workers, sometimes more, working for two 12-hour shifts.

“We went ahead and circulated it to the workers and, on a volunteer basis, they were given the opportunity to support this effort,” he said. “We encouraged people in not-so-good health or at-risk individuals not to participate. Health precautions are in place to help with the screening of people in and out of the building to create the best, safest work environment possible.”

Boston also has set up 560 beds for the homeless population at a former hospital in Brighton, as well as using a wing at Boston Medical Center, a Suffolk University dorm and tents located outside homeless shelters. Although the work is rapidly coming together at the convention center, Walsh has said he hopes the facility remains empty and is not needed and hospitals in the city are currently within their capacity.

Whether or not the beds are ultimately needed amid the ongoing health crisis, which already has claimed the lives of more than 200 Massachusetts residents and infected at least 11,000, Dobinski said the members of Local 25 were happy to get the opportunity to work, and do so for a good cause.

“The convention business has been extremely depressed since the outbreak,” he said. “So this has provided a livelihood beyond unemployment for a number of the personnel.” 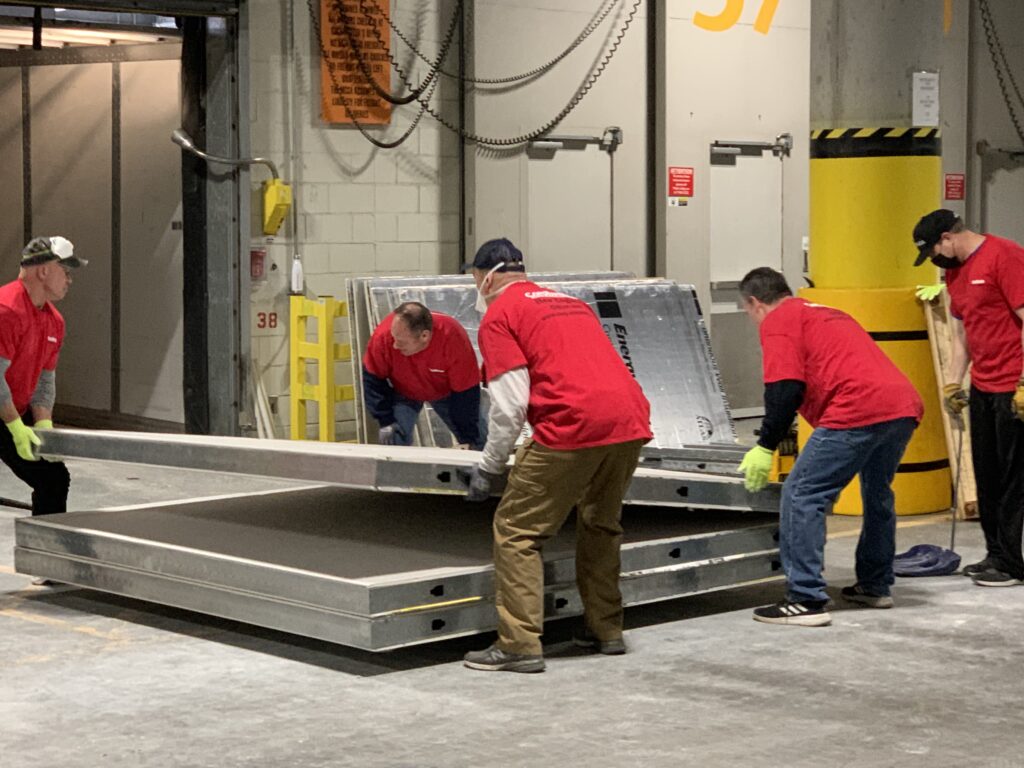 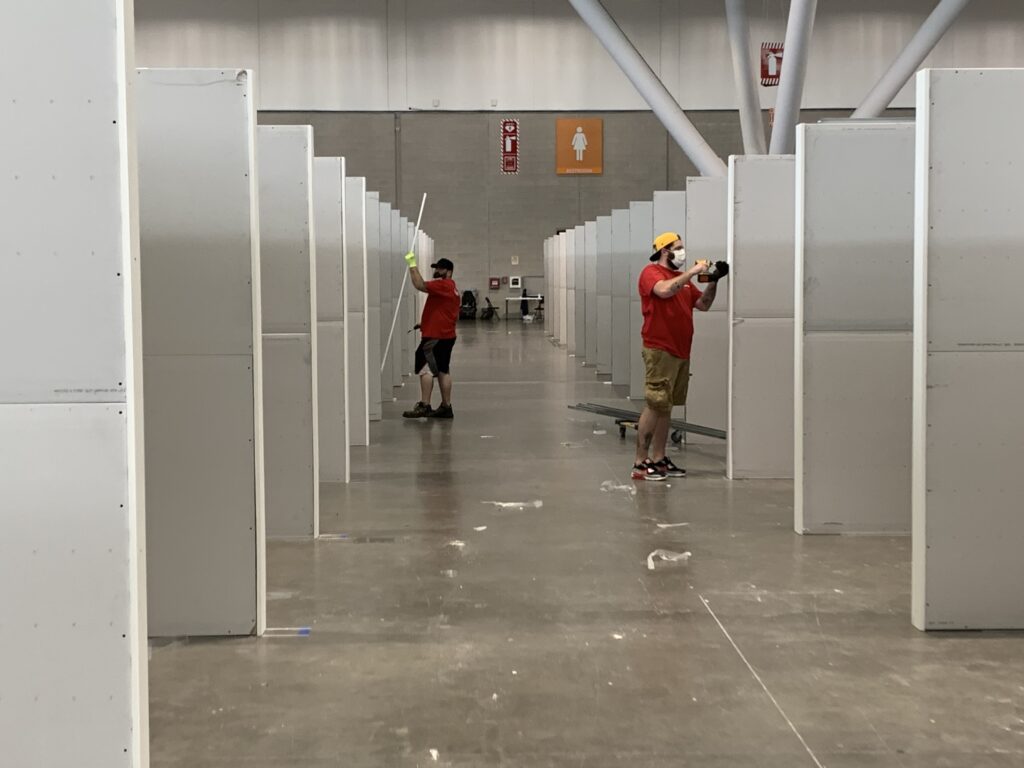 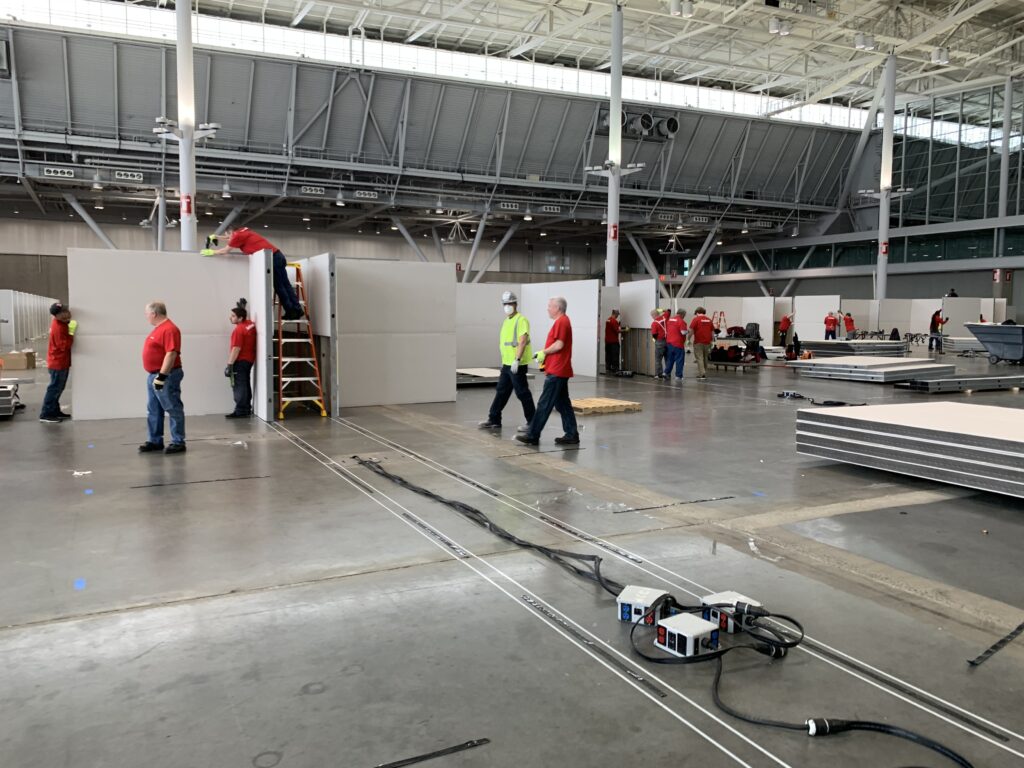 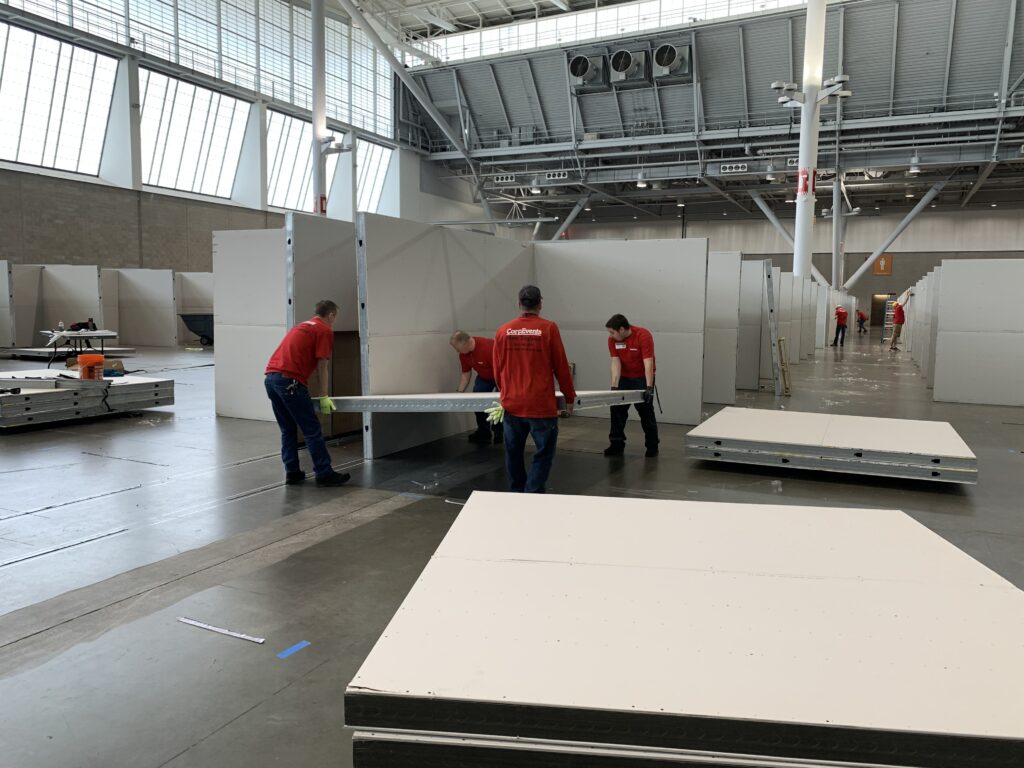 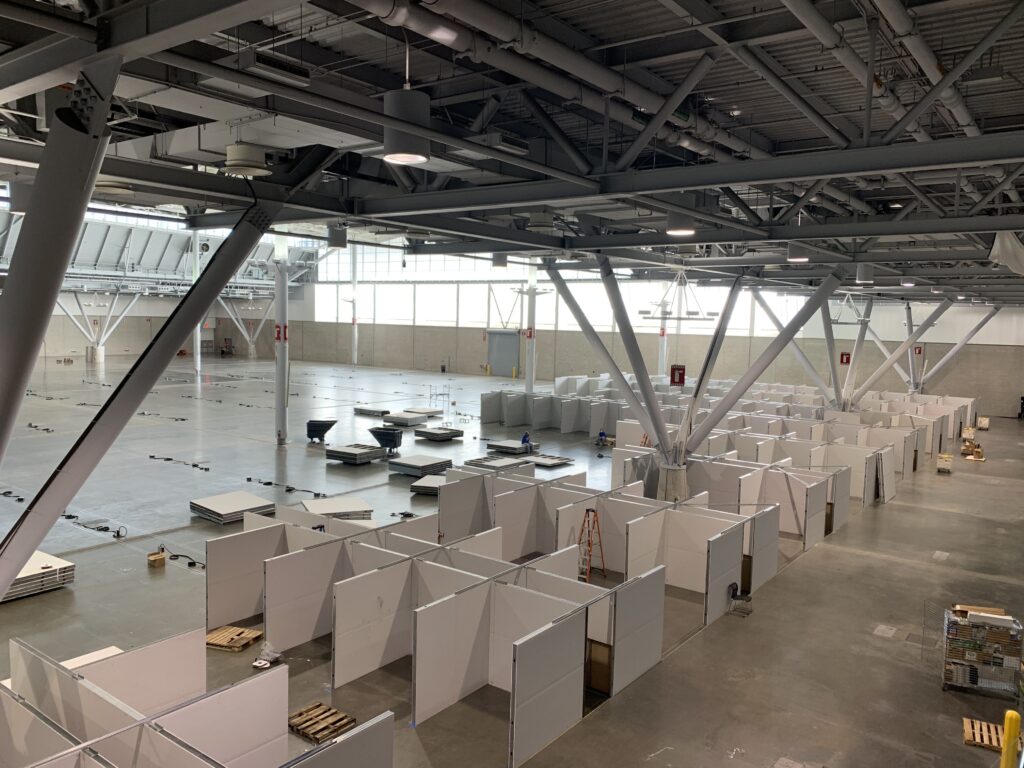