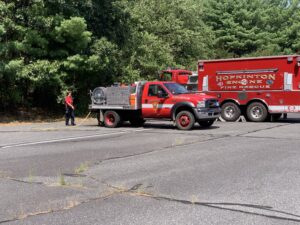 The Hopkinton Fire Department returned to 71 Frankland Road on Friday morning and afternoon to monitor the area, one day after extinguishing a brush fire in the woods.

Thursday’s fire, on forested land behind the former Liberty Mutual building, now owned by Seaboard Solar and designated for a solar array, affected about an acre, according to HFD personnel. Lt. Gary Daugherty led the HFD crew’s effort to contain and extinguish the blaze, spending about three hours at the site.

Chief Steve Slaman said he was investigating the cause but had not yet made any determinations. 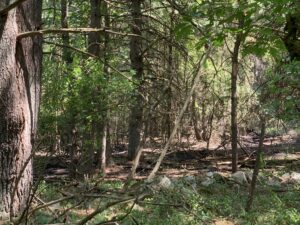 Some of the damage from Thursday’s brush fire is visible in the forest. PHOTO/JERRY SPAR 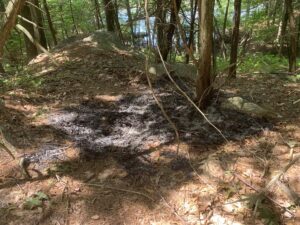 This small patch of land was burning when the Independent arrived to check out the site Friday afternoon, but it quickly extinguished itself. PHOTO/JERRY SPAR