Fire on Clinton Street could lead to water discoloration in town 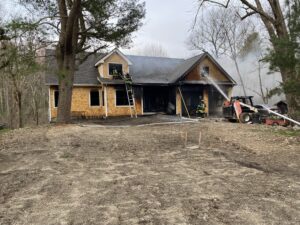 A fire at a house on Clinton Street was extinguished Saturday morning. PHOTO/HOPKINTON FIRE DEPARTMENT

Due to the Fire Department utilizing hydrants to fight a fire on Clinton Street early Saturday morning, the Water and Sewer Department is cautioning residents that there might be some water discoloration throughout the system. Residents are advised to check their water before using it and flush the cold water lines if necessary.

The fire occurred inside a home on Clinton Street. Units from Milford, Hopedale, Westborough, Ashland, Medway and Upton arrived to provide assistance.

Firefighters were called to Weston Lane shortly before 11 p.m. On arrival, the found a sprinkler activation on the first floor of the end unit of a three-unit townhouse, which heavy smoke conditions on the second floor, according to a press release from the state’s Department of Fire Services. One sprinkler head had activated, confining the damage to a small area in the dining room.

“This is the third sprinkler save in this development in the past three years, and each one involved a single sprinkler head containing the fire and limiting the damage,” said Hopkinton Fire Chief Bill Miller. “Without them, any of these fires could have caused major damage, injuries or worse. Home fire sprinklers have proven their value time and time again in our community.”

“Modern home fires burn hotter and faster than they did decades ago,” added State Fire Marshal Peter Ostroskey. “Home fire sprinklers are proven to increase survival and reduce property damage in these fires. They can control, contain and even extinguish a fire while firefighters are on the way, using a fraction of the water that a fire hose would.”

The fire originated in the dining room in the area of painting and staining supplies that had been in use as workers prepared for a homeowner to move in. The joint investigation by the Hopkinton Fire Department and State Police fire investigators assigned to the State Fire Marshal’s office determined that the most likely cause was the combustion of oily rags, which has caused several residential fires in recent weeks — including one that claimed a teenager’s life in Agawam last month. The oils in some paints, stains and varnishes release heat as they dry and can ignite if the rags are left in a pile or confined space. Fire officials recommend drying these rags individually outdoors, then placing them with water and detergent in a metal container with a tight-fitting lid.

← Letter to the Editor: LaFreniere, Mannan for Select Board Business Profile: Bert Rosengarten has eye for historical gems →