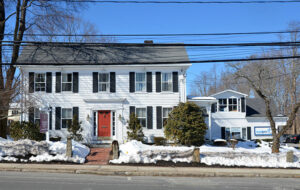 There will be a second public hearing regarding the future of the Claflin house on May 1.
Photo/Michelle Murdock

The Hopkinton Historic District Commission held the first of its two scheduled public hearings to gather input on the proposed single-property historic district for the Aaron and Lucy Claflin house at 76 Main St.

Opening the March 20 hearing, Historic District Commission Chair Amy Ritterbusch provided some background information about the process of creating the single-use historic district, why it is being created, and a summary of the proposed development of the property by owner Paul Mastroianni of REC Hopkinton, LLC, which includes a three-story mixed-use development with retail and/or office space and a total of 26 residential apartments. The property currently is zoned as downtown business.

“The process we’re following is proper and legal,” said Historic District Commission member Beth Kelly as she explained the need for the public hearings. She encouraged those in favor of preserving the property to show up at Town Meeting in May and speak. A two-thirds majority vote is required to establish the single-use historic district.

Kelly also talked about how the commission negotiates. She cited the cooperation of the owners of Pan Thai restaurant at 15 Main St. and said the root of the problem with 76 Main St. was the lack of compromise by the developer.

“The Hopkinton Historic District Commission is always open to compromise,” she said.

The Pan Thai location already was part of the Hopkinton Center Historic District, which was created in 1979. Commission member Mike Auen said that the commission should proactively identify potential properties for historic preservation before they are sold for development. While he supports the district, he said that in the case of 76 Main St. it is like putting a zoning restriction on the property after the fact.

Responding to the issue of compromise, Kathi Sherry from REC Hopkinton said the developer had looked at preserving the Claflin house, but that doing so was cost-prohibitive and limited what could be done with the lot. Requiring the house to stay doesn’t work, and if it cannot be demolished, it will just sit there. Asked if the developer would consider selling it, Sherry said that was a possibility but noted that it’s a commercial space.

“The owner is happy to donate it,” she said. “He is willing to donate funds toward the cost to move the house. We will formally outline the details of the donation once we receive the request from the Historic District Commission.”

Input from the public followed, and those present spoke in favor of preserving the house and creating a single-property historic district. John Palmer of 32 Main St. said that 76 Main St. is part of the town that has been around for a long time.

“This would be detrimental to my property,” he said. “I’m opposed to it.”

Jim Burke of 80 Pleasant St. also spoke in favor of preserving the home and said, “It appears to be a matter of money. I find it offensive.”  He said he would do anything to help save the Claflin house.

Speaking as a resident and as a member of the Historical Commission that voted to issue the six-month demolition delay and to seek the creation of the single-property historic district, Nanda Barker-Hook said that if any building deserved to be preserved, this is the one. She cited the new library as an example of combining old and new and asked if the developer would be willing to do the same for 76 Main St.

Next up, Mike Roughan, chair of the Historical Commission, said he agreed with Barker-Hook and asked if the relocation specifics, if the house was to be donated and moved, could be provided in writing, His preference, however, was to keep the Claflin house on location. He also agreed that it is important to identify buildings to be saved.

With the March 20 public hearing complete, the next step in the process to create the single-property historic district at 76 Main St. is a second public hearing to gather feedback on the final study report. That is scheduled to be held on May 1 at 7 p.m.

Additional feedback from residents is welcome at that meeting, via email to hdcchair@hopkintonma.gov, or via mail to the Historic District Commission, 18 Main St., Hopkinton, MA 01748.

Two articles related to the preservation of the Claflin house at 76 Main St. are on the annual Town Meeting warrant. One will extend the town’s demolition by-law from a six-month to an 18-month delay (which will apply to all structures classified as preferably preserved structures). The second article, which requires a two-thirds vote, will establish the 76 Main St. Historic District.

For more information about the proposed historic district, visit the town website at http://www.hopkintonma.gov/departments/land_use_department/HHDC.php.