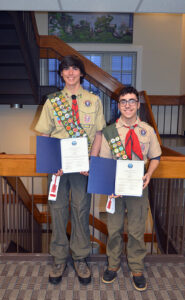 Troop 4 Eagle Scouts Jordan Hanna (left) and Austin Marques were honored at the March 19 Board of Selectmen meeting.
Photo/Michelle Murdock

Selectmen at their March 19 meeting approved proclamations for two Troop 4 Eagle Scouts: Jordan Hanna and Austin Marques. The duo also will be honored at a special Court of Honor ceremony for achieving the Eagle Scout award, Boy Scouting’s highest honor, on March 31.

The award is a performance-based achievement with requirements in the areas of leadership, service and outdoor skills. To become an Eagle Scout, Hanna earned the required 21 merit badges and served his troop in variety of leadership roles including senior patrol leader, quartermaster and den chief. In addition to the required 21 badges, Hanna also earned another 26 merit badges. His service project involved trail work to benefit the Hopkinton Trails Club and resulted in the construction of a bridge across a stream, capable of bearing the weight of horses.

To raise money for the project, Hanna said he went to the recycling center to collect cans. Hopkinton Lumber provided a lot of the hardware for the bridge, and a large sum was provided by a local donor.

The biggest challenge for Hanna was meeting the donor’s requirement of ensuring that the bridge could support the weight of her horses.

“That was a struggle to figure out,” he said. “It ended up being a case of build it way stronger than it has to be and then … it’ll be OK.”

When completed, the project opened up miles of trails that were previously unable to be connected.

Marques also went above and beyond the required 21 merit badges required to become an Eagle Scout, earning an additional six badges. He served in a variety of leadership roles, including assistant patrol leader twice. He developed, planned and provided leadership for an Eagle Scout project to benefit the Orchard Hill at Sudbury Assisted Living Community. The project involved three phases: 1) building and painting a bird house art installation with the senior residents, 2) delivering a detailed PowerPoint presentation on what boy scouting is all about, and 3) building a large purple martin bird house surrounded by landscaping to create a bird sanctuary viewing area for the Orchard Hill residents.

“I’d like to thank the whole Orchard Hill organization,” Marques said. “They all helped me through the process and funded everything. They really knew what they wanted to do and helped me along the way.” He also thanked his neighbor Jennifer Belisi who came up with the idea for the project and was happy to see it built.

The scouts were commended by the Board for their hard work and community service.

“I think it’s fabulous,” said Irfan Nasrullah. “A wonderful life lesson to contribute to your town and to work and put a whole project together; a valuable life experience that will serve you well as you both grow older and move forward in life.”

Both Hanna and Marques will graduate from Hopkinton High School at the end of May. Hanna, who was captain of the varsity ski team, plans to attend Massachusetts Maritime Academy. Marques, a member of the cross country team, also plans to attend college in the fall.