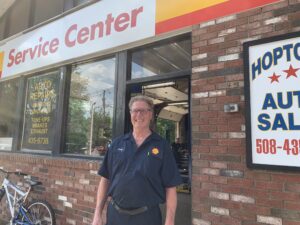 Jerry Lazzaro has run the gas station/repair shop in the center of town since 1983, but after the company that owns the station raised his rent, he determined it was not financially feasible to continue. PHOTO/JERRY SPAR

After 38 years of operating the most prominent gasoline station and automotive repair shop in Hopkinton, Jerry Lazzaro is throwing in the towel. His story is the tale of a hard-working blue-collar businessman who was loved by his dedicated customers. Few people in this community supported more local charities than Lazzaro, who had more than his share of battles with both the Town of Hopkinton and his ever-changing landlords/gasoline suppliers over the years.

“It has been a good run,” Lazzaro said. “And I want to thank all the longtime, loyal customers. It’s been a lot of work, that’s for sure, and I’m going to miss the customers. I wanted to stay a few more years, but the numbers don’t work anymore. I just can’t do it.”

Lazzaro, who grew up in Norwood and now lives in Walpole, began working at his father’s Exxon station in Brookline as a teenager. His brothers also went on to operate service stations in Framingham and Holliston. He took over in Hopkinton Center when he was 29 years old in 1983. Things got off to “a slow start,” according to Lazzaro, who drew the ire of Hopkinton’s ruling elite when he fired the son of a prominent town official two weeks after opening his doors on Main Street.

“Shortly after I fired that kid the building inspector was all over my case. I sensed some sort of retaliation because I was from out of town,” he recalled. “They wanted to inspect everything, they wanted to show me who was boss. As the years went on, I got along with the town better and better. [Former longtime treasurer/collector] Maureen Dwinnell was awesome, she went to bat for me. … [Assistant building inspector] Mike Shepard, who knows what it is like to run a business, and the people we have now are great.”

During Lazzaro’s tenure in Hopkinton, the service station has changed ownership on several occasions. The property and his lease has been bought and sold by some of the nation’s largest refiners, including Exxon/Mobil and Conoco/Phillips. The location currently is owned by Petroleum Marketing Group. The lease requires Lazzaro to purchase 100 percent of his gasoline from his landlord, who sets the price.

“It has been a nightmare dealing with these people,” Lazzaro said. On one occasion he took his landlord/supplier to court, with limited results. It was “exhausting and expensive, too.”

The ownership changes contributed to many brand changes over the years. “First we were Exxon, then Gulf for about eight years, then we were Sunoco for seven years and now we’re a Shell station,” Lazzaro said with a sigh. “The first year I was here, my rent was $1,340 a month [compared to $14,600 now].”

Despite all the big company turmoil, the one constant has been Lazzaro and his honest, hard work.

“Fixing cars is a tough job, and it ain’t fun when the gas prices go up, customers get angry. Sometimes they get ugly!” Lazzaro’s brother Neil offered, based on his own experience. “But Jerry is an incredible worker and he gets through it. He knows how to run a gas station.”

Lazzaro improved the income stream by adding propane gas, expanding his convenience store and lottery offerings and even selling used cars, which he would restore and warranty. Each time he had to petition the town for permits. It was not easy. Lazzaro also found that once his sales increased, so did his rent, because he increased the value of his landlord’s asset by adding newly permitted lines of business.

Over the years Lazzaro often could be overheard giving Neil advice over the phone. As a capable and respected businessman, Lazzaro often has counseled other local business operators on how to handle situations with employees and difficult customers or even financial matters.

Every year on the Friday night before Christmas, Lazzaro would host a holiday party, known locally as “The Blue Collar Event of the Year,” right in the repair bays of his station. Landscapers, plumbers, carpenters and handymen all would share in the holiday joy. One year an off-duty police officer attended. Everyone was welcome.

Lazzaro’s station was a gathering spot for many a Hopkinton resident. Eccentric characters and local legends appeared regularly. Danny Laughlin would purchase $2 of gasoline every day, while former Bittersweet owner C.J. Dunne would try his luck in the lottery in an effort to reverse his financial fortunes. Dr. Steve Perryman would bring in antique Fords and Jeeps from the 1960s for Lazzaro to fix. Lazzaro had an eclectic clientele, and he enjoyed them all.

Customers say Lazzaro is a most capable and honest mechanic. Those who have done business with him consider him an asset. “We love and trust Jerry,” longtime resident Beth Kelly offered. “He can fix anything, and he does it with a smile.”

Lazzaro had several business clients, such as the landscaping company New View, McCarthy Pools and Jamie Oil, who relied on Lazzaro’s hard work and expertise to keep their vehicles running right. A familiar scene would occur every year in late August when nervous parents would drop off a 10-year-old car, telling Lazzaro that “the college is in Philadelphia” or “almost out as far as Buffalo” and they want their child to travel as safely as they possibly can. They knew that if Lazzaro worked on the car, there was a lot less reason to worry.

The past few years have been difficult for Lazzaro’s business. The constant construction on Main Street and the impact of COVID-19 caused Lazzaro’s gasoline volume to drop in half. Repair work and routine maintenance such as oil changes and brake jobs are down about 25 percent because people are driving less. After his landlord announced a rent increase to $14,600 per month from the $12,500 he was paying in 2020, Lazzaro studied the numbers and decided to call it quits.

“I said, ‘Are you kidding?’ I can’t do it anymore. … I wanted to work another three years, but I can’t make that rent, especially with all this construction going on,” he said.

As he winds things down he thinks not of the difficult employees, the exhaustive depositions against the big oil company or the unreasonable rent increases.

“I am just thankful to have met Beth Kelly and work on her fleet of Saabs, I am grateful to have employed about half of the kids who played football for Hopkinton High and I thank New View, my biggest customer, and everyone else for their business and friendship over the years,” he said. “I really just want to thank the people of Hopkinton.”

One last thing: New View as a matter of policy does not purchase or operate newer or late model vehicles. “We don’t have to, we’ve got Jerry to fix ’em!” New View’s John Schofield disclosed at Lazzaro’s holiday party about five years ago. Schofield knows Lazzaro’s work very well. He pumped gas for Lazzaro in the mid-1980s when he was a teenager. Like Lazzaro, he did it with a smile.