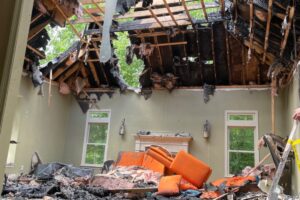 A fundraiser is underway to help the family whose Saddle Hill Road home suffered extensive damage in a May 26 fire after apparently being struck by lightning. PHOTO/AU FAMILY GOFUNDME PAGE

A relief fund was started by a neighbor for the Au family, whose Saddle Hill Road home caught fire May 26 and suffered severe damage. The fire apparently started when lightning struck the home. The residents were not home at the time, but one of the family’s two cats perished in the blaze, according to the GoFundMe page.

The individual who started the fundraiser indicated the family had moved in last August and had recently finished a major interior renovation.

As of Thursday morning, the fundraiser had received donations totaling $14,600 toward a goal of $15,000.