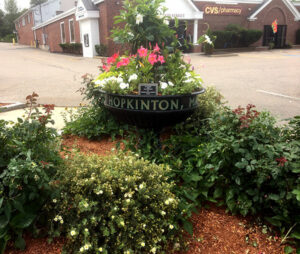 The Hopkinton Garden Club maintains the planters in the center of town, like this one at the corner of Main Street and Grove Street.
PHOTO/JERRY SPAR

In the center of town potted planters dot the sidewalks, starting from the police station heading east up to the Korean Presbyterian Church.

These plants, and others throughout the town, are maintained throughout the year by the Hopkinton Garden Club. The club has a long history of assisting the community, going back to when the club was originally founded in 1924.

“The main thing we focus on is town beautification, but we also focus on the education of our members and guests through programs and speakers, and supporting town activities throughout the year,” said Ann Hogaboom, who will take over as club president in July after serving as secretary.

The Garden Club also plants and maintains sites including the doughboy memorial, the Town Common water trough, the George Brown statue and the Hopkinton welcome sign, among others. During the holiday season, club members decorate the gazebo and library.

Hogaboom also said the Garden Club wouldn’t be able to do all its activities without the help of the town and the generous business sponsors. The sponsors have allowed the club to provide more plant selections in their planters and sites, helping purchase 14 new self-watering planters in 2018.

“John Westerling and the DPW have been fantastic, they’re storing the pots over the winter, they put them in place in the spring and summer,” Hogaboom said. The DPW also helps by watering the planters and the sites.

The club’s biggest event of the year that is also is its biggest fundraiser is the annual plant sale in May.

The Hopkinton Garden Club hosted its first green sale last year, creating holiday-themed table arrangements, wreaths and other decorations. The club will host another sale on Dec. 7 in coordination with the annual Holiday Stroll.

Though Levy is stepping down after a two-year stint as president, she still plans on helping when she can.

“I’ll be helping with the transition and continue working on the things that I have been, but I’ll gladly pass on the administrative stuff,” she said with a laugh.

Levy noted that four members of the club, Henry Schmidt, Kathy Yankee, Merylyn Mezitt and Margaryta Lindi, won a blue ribbon at the Boston Flower and Garden Show in March for floral design, which has become increasingly popular in the club.

“We’ve always been a ‘dig in the dirt’-type garden club, but we really have an increasing amount of members who are interested in floral design. … We want to make sure we’re encouraging those members and there are programs for them,” Levy said.

Club meetings as well as the programs and speakers the group hosts monthly throughout the year are free for the public, and anybody interested in encouraged to attend. The meetings are held September through April, on the third Tuesday of the month, though locations tend to change. Updates on upcoming meetings and programs can be found at hopkintongardenclub.com or at the group’s Facebook page. The club will host six programs throughout the club year, starting with “Good bugs, bad bugs” with Bonnie Power at its meeting on Sept. 17.

Along with programs and speakers, the club also contributes to events in town, including providing floral centerpieces for the monthly veterans breakfast. The club also participates in the ‘Books in Bloom’ event held at the library in October, and the “Arts in Bloom” that was held in June at the Hopkinton Center for the Arts.

Levy said that there’s a lot of diversity in the club, with beginning gardeners along with those with more experience and knowledge, including several master gardeners, who have been trained in the science and art of gardening.

“We share a lot of information and we have a lot of resources so members don’t feel as if they have to know everything,” Levy said.

The club currently has a membership of 45 people, with a mix of long- and short-term members, Hogaboom said.

The club also offers a scholarship program for high school students entering into an environmental field in college, as well for members wanting to take classes or workshops in the subject.

Levy said that although she’s stepping down as president, she’ll look back on it as a great experience. “There are wonderful people in this club,” she said. “Not only do they share their gardening experience, they share whatever else you might need. It’s a wonderful community that’s supportive of one another.”