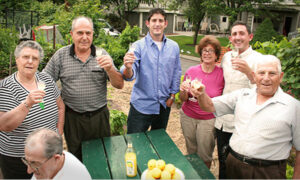 Hopkinton resident Phil Mastroianni (second from right) and his brother, Nick (middle) have turned Fabrizia Spirits from a hobby into a growing business.

Speaking from inside the new warehouse in Salem, New Hampshire, his company moved into four months prior, Hopkinton resident Phil Mastroianni, founder and co-owner of Fabrizia Spirits, has to keep his voice loud, competing with the noises of bottles clinking down the assembly line and equipment loudly humming.

It wasn’t always like this, though, as he recalls when he was in the beginning stages of his company, deciding to take the risk and pursue creating his hobby into a business, in 2008.

In those almost 11 years since making the fateful step, through ups and downs and a combination of what he calls luck and naive ambition, Mastroianni was able go from taking four months to sell 160 gallons of his original product, homemade limoncello, to expanding into a canned line of beverages, selling 41,000 cans in 2018 and becoming one of the biggest producers of limoncello in the New England region.

The Fabrizia story has its roots in 2003, when Phil was a junior at Bentley University, studying abroad in Florence, Italy. He had a week off, and his father and aunt flew out from Massachusetts to visit him. The culture shock in Italy was mind-blowing, he said, and seeing people growing and eating their own food, “I was sort of empowered of the idea you could do these things on your own.”

His father and aunt took him to a small hilltop town called Calabria, where three of his four grandparents were born. He met members of his extended family and became interested in Italian culture, particularly the idea of making his own food and beverages.

He met with his family in Italy more frequently through the years, and in the summer of 2007 while on a visit he was introduced to limoncello, which he began to make when he got back home for fun.

When his uncle Joe tried his limoncello, he remarked that it was the best limoncello he ever had, and that he should be doing that for a living. At first Mastroianni laughed it off, but the idea stuck with him and he began to take the it seriously.

Mastroianni describes limoncello as a traditional Italian liqueur, made from the zest of lemon infused with alcohol, typically as an after-dinner drink and served chilled.

He made his first few batches of limoncello in his parents’ and grandparents’ houses in Newton, buying about 1,000 lemons and gathering family and friends to help peel them.

“Some would work, some would watch,” he said with a laugh.

After the fourth time, he knew it was necessary to expand, and in order to do that he would have to get licensed as a liquor manufacturer, requiring him to own or rent a commercial space, which led him to New Hampshire.

For the first four years of Fabrizia — named for a town in Italy near where his grandparents grew up (it translates to “works with hands”) — Mastroianni was still working full time as an accountant. He was first only able to get one or two days off a week, spending those days driving around to liquor stores in states where his product was available and talking to anybody who would listen.

Two years into the company, with Mastroianni still working full time and needing additional help, his brother, Nick, began to assist, recruiting friends to prepare and bottle the limoncello while Phil worked his other job. Nick eventually became a part owner.

“He sort of saved me in a sense,” Phil said. “I know how to make the limoncello, but he handled all the manufacturing, which is an important part. … He’s really talented with it.”

Mastroianni — who moved to Hopkinton in 2013 after marrying Lindsey MacKay, who grew up in town — didn’t have to travel far to move into the new warehouse. He’s in the same building, just in a different space, but the move nearly tripled the amount of space he had previously.

“We did all these things to stay in that small space longer, but we were fooling ourselves, we were like ants in there,” Mastroianni said.

Once he began adding canned pre-made cocktails to his line of his beverages in 2015, it became necessary to move into a larger space.

The new warehouse affords him almost 6,000 square feet, compared to the previous space of 1,800 square feet. This extra space allowed him to get extra equipment, including a 1,500-gallon stainless steel automatic mixing tank and a small walk-in freezer to store lemon juice.

The biggest addition was a lemon peeler machine that Mastroianni had imported from Italy, allowing him to import and peel the lemons in large quantities. Mastroianni said with increased business it allows him to buy bigger quantities of lemons that are imported from Sicily, receiving around 140,000 lemons in a shipment.

The biggest challenge for Fabrizia this year was having the relocation to the bigger warehouse space delayed due to the government shutdown in the beginning of the year, delaying them from moving in and utilizing the space for two months.

“First our small business loan got held up, that delayed the closing on the building, and then we weren’t able to get our license right away,” Mastroianni said. “It was extremely stressful because we were taking on this huge financial commitment.”

Fabrizia’s original canned beverage, which the company started producing four years ago, is called the Italian margarita. It’s comprised of lemonade, limoncello and tequila. Fabrizia recently added a second type of canned beverage to its line: Italian lemonade, made with vodka, lemonade and limoncello.

Fabrizia also added two types of liqueurs aside from the original limoncello: blood orange liqueur and limoncello made with cream.

Mastroianni still keeps an old batch of limoncello, made more than 10 years ago when he was making the drink for fun, and without the idea of turning it into a business. He could have used the batch, he said, but he decided against it, keeping it as a memento to remind him of the Fabrizia journey.