Self-designed sculpture would be placed near start line 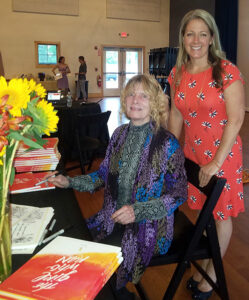 Bobbi Gibb (sitting) made an appearance last month at Hopkinton Center for the Arts, where she was joined by Dr. Jaimee DeMone from the 26.2 Foundation, which is spearheading efforts to fund a statue of Gibb, the first woman to finish the Boston Marathon.
PHOTO/MICHELLE SANFORD

Bobbi Gibb can’t remember a time when she wasn’t running. Ever since she was a little girl, Gibb said running made her feel alive. The Rockport resident is now in her 70s and she continues to run every day. It’s hard to imagine the number of miles she’s run throughout her lifetime. However, it is a specific 26.2 miles that she ran more than 50 years ago that she will always remember and be remembered for.

On April 19, 1966, Gibb became the first woman to finish the Boston Marathon. She discovered early on that the road to running the marathon back then wasn’t going to be easy. When she wrote for an application to enter, she received a letter back from the Boston Athletic Association saying women were not physiologically able to run a marathon, and competitively women were only permitted to run 1.5 miles. Gibb knew she had something to prove, not only for herself but for all women.

Living in California at the time, she took a Greyhound bus to Boston. On the day of the Marathon, she put on her brother’s Bermuda shorts and a blue hooded sweatshirt so no one could tell she was a woman. When the starting gun went off, she jumped out from behind some bushes she was hiding in at the starting line in Hopkinton and began her 26-mile run toward the finish line. And the rest is history.

For a number of years, runners and organizations having been raising funds to create and install a life-size sculpture of Gibb to be located in Hopkinton, not far from the starting line. The ironic twist is Gibb, who studied art at the Museum of Fine Arts, has created the sculpture herself.

On the evening of June 24, members of the 26.2 Foundation invited interested individuals and runners to the Hopkinton Center for the Arts to hear Gibb’s story and brainstorm ideas on how the rest of the funding can be raised. Hoping to inspire the group, Gibb herself was present and spoke about her historic run.

“It was about overcoming prejudices,” Gibb told the attendees. “Following your passion should be a birthright.”

Dr. Jaimee DeMone of the Hopkinton-based nonprofit 26.2 Foundation (26-2.org) stated approximately $25,000 still needs to be raised to complete the initiative. The goal is to have Gibb’s sculpture installed in time for the 2020 marathon. Plans are to have it placed on a private property located at the corner of Hayden Rowe and Main Street.

A number of statues related to the Boston Marathon have been created, including those of Stylianos Kyriakides alongside fellow Greek legend Spyridon Louis (at Weston Nurseries), Dick and Rick Hoyt (in front of Center School) and George Brown (at the Town Common), who was instrumental in having the marathon’s starting line moved to Hopkinton. All in attendance agreed each statue is very deserving but feel it’s time for Gibb to be honored for opening the doors for women in the sport of running.

“People are very, very grateful for what Bobbi did,” said DeMone. “She paved the way for women runners.”