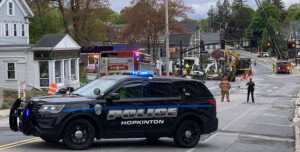 Editor’s note: This story has been updated multiple times, most recently at 9:55 p.m. with a comment from the town manager.

Due to a gas main break, Main Street was closed Monday around 9:45 a.m. from Pleasant Street to Hayden Rowe Street. Emergency personnel rushed to the scene, checking gas levels inside area buildings and attending to at least one report of an individual feeling ill.

The Hopkinton Police Department, in a press release sent at 11:39 a.m., stated that a construction crew working at the intersection of Main Street and Grove Street (in front of CVS) had struck a gas line. No injuries were reported.

Authorities requested that people avoid the area, although it appeared that most businesses on the street were not evacuated. The HPD press released stated that “some businesses and homes in the immediate area were evacuated.”

An odor of natural gas could be detected in the air a few blocks from the scene for much of the morning.

At approximately 11:40 a.m., a representative from the Hopkinton Fire Department stated that Eversource indicated the leak had been successfully repaired. Crews proceeded to take final readings of the businesses in the immediate vicinity before reopening the downtown area to vehicular traffic at around 12:10 p.m.

Water and Sewer Department manager Eric Carty noted that due to the Fire Department hooking up its hoses to several hydrants downtown, there could be some discoloration in the water throughout the system.

Late Monday, the town issued a press release about the incident, indicating that town manager Norman Khumalo met with the contractor’s representatives to determine the cause of the issue and how to prevent a repeat. According to the release, “Review of the scene showed an old structure in the ground as the cause of the leak. The structure was not tied to the gas line or related to the Main Street Corridor Project.”

“We now understand why and how this happened,” Khumalo stated. “We have learned from the situation and how to prevent similar issues moving forward.”