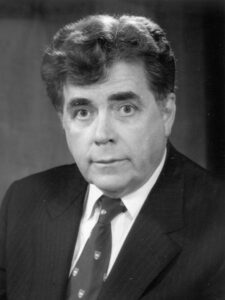 George R. Desmond of Framingham, formerly of Sherborn, passed away peacefully on Aug. 13. He was the husband of Alice B. Desmond, to whom he was married for 59 years.

Born in Framingham in 1930, he was the son of the late George R. Desmond Sr. and Kathryn Orzeck Desmond. He graduated from St. Stephen School in Framingham, Boston College High School in 1947 and Boston College in 1951. He started law school at Boston College and then served in the U.S. Army 66th Counterintelligence Corps in Germany as a resident special agent in Weiden, Bavaria, for two years. After his discharge from the Army he finished law school at Georgetown University in 1956 and worked as an attorney for the U.S. Department of Justice in Washington and on special assignments in Montgomery, Alabama; New Orleans; Biloxi, Mississippi; and Pensacola, Florida. While in Montgomery he met Alice Ballard, whom he married in 1960.

He stayed with the Department of Justice until 1962 when he returned to Framingham to open a law practice. He started out in a general practice of law but over the years the practice developed into a concentration on bankruptcy and insolvency. He was involved in many notable reported cases and was active in bar association activities, serving as chairman of the Massachusetts Bar Association Committee on Bankruptcy from 1970-76 and as president of the South Middlesex Bar Association in 1977.

He enjoyed traveling across the country with his family, cooking, and hosting friends at his home. He served as a lay lector at St. Stephen Church in Framingham and St. Theresa Church in Sherborn. He was especially devoted to Boston College High School, where he served as the reunion organizer of his class.

In addition to his wife he is survived by his daughter Mary Hooper, her husband, Sean Hooper, and grandchildren Liam Hooper and Haley Hooper of St. Charles, Illinois; his son, John Desmond, his wife, Cecile Desmond, and grandson James Desmond of Hopkinton; his daughter Susan Desmond of Lynn, and his sister Maureen Kelly, and her husband, Brian Kelly, of Camden, Maine. He was predeceased by his sister Patricia Hunter of Natick and Wolfeboro, New Hampshire.

A funeral Mass was held Aug. 17 at St. Stephen Church. Funeral arrangements were entrusted to the Callanan Cronin Funeral Home in Hopkinton (callanancronin.com).