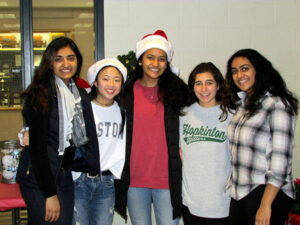 A Hopkinton High School club will be raising funds again this holiday season to help give families the chance to have a home for the holidays.

The Habitat for Humanity club will be hosting its annual Gingerbread House Decorating Fundraiser on Saturday, Dec. 14, from 11:30 a.m. to 2 p.m. in the HHS cafeteria. Proceeds from the event will go to help meet housing needs for those who are without.

Habitat for Humanity is a global non-profit housing organization working in local communities across all 50 states in the U.S. and in approximately 70 countries. Habitat’s vision is of “a world where everyone has a decent place to live.” Habitat for Humanity reaches these goals by aiding impoverished communities to build their own homes alongside volunteers and pay an affordable mortgage.

The HHS Habitat for Humanity club started in 2017 when Thrusha Puttaraju, now a senior, wanted to bring this volunteer opportunity that would appeal to high school students, where they could see where the money they raised was going and the impact their volunteerism would have.

“There were a bunch of clubs at this high school, but I felt like this club would be a tangible way for students to give back in their community,” Puttaraju said. “It is something that we can go back 20 years later and say, ‘Wow, we helped build that.’ ”

In the past few years, the HHS Habitat for Humanity club has raised more than $4,000 for the Worcester Regional Chapter. Those funds have been used for home construction costs in local towns, including Holliston and Northborough. Along with the much-needed funds, the HHS club has been able to donate many hours of time working on building homes, side by side with the families who will benefit from their service.

“We live in a part of Massachusetts that is very wealthy, so at times we are sheltered from the housing inequalities and other problems that people face in other areas,” Puttaraju said. “Doing this gives use a glimpse of other struggles people face while helping others pay for home and pay their rent.”

The Habitat club will be offering community members a chance to build their own houses for the day — gingerbread ones — during a fun and festive community event.

“This is a community-based fundraiser. We try to involve the community as much as possible because they are our biggest supporters,” Puttaraju said.

All ages are welcome to the Gingerbread House event, but children 12 and under must have a parent/guardian present with their team. Teams are limited to a maximum of eight people and a minimum of two people. It costs $5 per participant. Pizza, snacks and drinks will be available at the event for $1 each. Registration can be found on the club’s website: hopkintonhs.wixsite.com/habitat4humanityhhs.