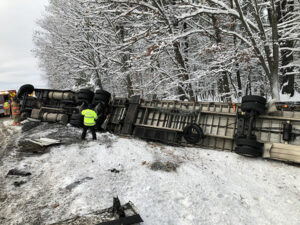 Hopkinton Fire Department personnel responded to a tractor-trailer rollover on the MassPike off-ramp to Interstate 495 on Dec. 3. Minor injuries were reported.

10:54 a.m. A Main Street caller reported her neighbor was transported to the hospital a few days earlier and she was concerned about the dog alone in the house. The patient’s sister was contacted to take care of the dog.

2:21 p.m. A caller reported speeding vehicles on East Main Street in the 25 mph zone, including a school bus that nearly hit a dog walker. Officer Jay Deiana responded and School Resource Officer Philip Powers was to speak with the bus driver. Radar logs were to be conducted.

5:23 p.m. Sergeant Matthew McNeil and Officer Derek Morton responded to a report of a two-car motor vehicle accident on West Main Street. No injuries were reported.

10:44 p.m. A Davis Road resident complained of her neighbor making noise and wanted the incident logged.

1:06 a.m. Sergeant Arthur Schofield and Officer Stephen Buckley checked on a motor vehicle parked on Main Street and spoke with a marathoner from Poland. All was OK.

7:46 a.m. An alarm company reported a Hawthorne Lane resident heard noises in her basement. Sergeant Aaron O’Neil and Officers Ryan Polselli and Moira McGaffigan responded and checked the residence with a negative find on anything suspicious.

9:24 a.m. A Downey Street caller reported a neighbor’s dog was running loose in the neighborhood. The animal control officer was contacted.

9:56 a.m. A walk-in requested a check of the tint in his vehicle’s windows, as he recently transferred registration from Florida. Officer Moira McGaffigan assisted.

2:00 p.m. A walk-in reported she lost her passport and wanted the incident logged.

9:06 a.m. A caller reported a car hit a pole on Main Street. No injuries were reported. Sergeant Aaron O’Neil and Officer Tyler Brabham responded. A report was to follow.

5:56 p.m. Officers Brian Sanchioni and Preston Mucciarone responded to a two-car motor vehicle accident on West Main Street resulting in a possible head injury to a 61-year-old male. An ambulance was requested. Two people refused treatment. A report was to follow.

10:14 p.m. A caller reported a large trailer parked partially in the roadway of Priscilla Road. Officer Preston Mucciarone responded and reported the trailer was being used for a driveway paving job and was not a hazard.

1:19 p.m. A caller reported an erratic driver on Hayden Rowe Street. Officer Brendon Lyver responded and checked the area with a negative find.

1:29 p.m. A caller reported a needle on the ground on Main Street. Officer Brendon Lyver responded and disposed of the needle.

7:08 p.m. Sergeant Matthew McNeil and Officers Brian Sanchioni, Preston Mucciarone, and Robert Ekross responded to a chemical spill on South Street. A hazmat team was notified and additional ambulances from Ashland and Milford were requested. The spill was contained and the building was ventilated.

10:16 p.m. A Main Street store employee handed in two Massachusetts IDs that were left at the store earlier in the day.

11:07 p.m. A caller reported he noticed damage to his vehicle parked on Main Street. Officer Brendon Lyver responded and took a hit-and-run report.

9:22 a.m. A Wood Street caller reported her brother was missing, and it was believed he is suicidal. The caller stated her brother left their mother’s vehicle parked at the Woodville boat landing. Police Chief Edward Lee and multiple officers responded and took command at the boat ramp. Air wing and the State Police K-9  cadaver dog were requested. The search was suspended at 3:50 p.m.

11:22 a.m. Officer Matthew Santoro assisted the Fire Department in responding to a fire alarm investigation on Westcott Drive. All was under control after a cooking mishap.

11:49 a.m. A walk-in reported a suspicious incident on Cedar Street of a man who jumped out of a vehicle, stared at a snowplow, jumped back into the vehicle and drove away. The walk-in wanted the incident logged.

12:04 p.m. A caller reported she hit a parked vehicle on Walcott Street. Officer Matthew Santoro responded and located the owner of the vehicle.

12:33 p.m. A contractor working on a barn on Grove Street reported witnessing a male in a Hopkinton football jacket attempting to sell a bike in the back parking lot of CVS. When the other individual left, the male tossed the bike in the woods and drove off in a grey Mustang. Officer Matthew Santoro responded and investigated the incident.

8:14 p.m. A Saddle Hill Road resident reported leaves are on fire at his neighbors’ property about 30 feet from their garage. Officer Preston Mucciarone responded along with the Fire Department and the fire was extinguished.

1:37 a.m. A caller reported a noise disturbance on Mayhew Street involving four people outside. Officers Robert Ekross, Derek Morton and Brendon Lyver responded and found a man and woman in a verbal argument. The male party went on his way.

9:34 p.m. A West Elm Street caller reported someone knocking on her back door or garage door. Officers Derek Morton and Benjamin Stickney responded and checked the area with a negative find.

11:11 p.m. A Revolutionary Way caller complained of noise in the neighborhood for several hours. Sergeant Arthur Schofield and Officer Jay Deiana responded and were unable to make contact with the neighbor but found all quiet upon arrival.

11:42 p.m. A walk-in reported a fallen tree in the roadway of Cedar Street. Sergeant Arthur Schofield responded and moved the tree.

12:12 a.m. Sergeant Arthur Schofield checked on a motor vehicle on Legacy Farms North. All was OK, as the vehicle belonged to a new resident.

8:58 a.m. A walk-in from Hayden Rowe Street spoke with Officer Jay Deiana about a protective order involving his stepdaughter and her ex-boyfriend.

3:22 p.m. Officer Derek Morton responded to a civil dispute between a homeowner and contractor on Cedar Street and spoke with both parties. Extra checks of the home were requested.

7:57 a.m. Officers Moira McGaffigan and Jay Deiana reported a vehicle fire on Mayhew Street. The Fire Department responded, and the fire was extinguished before their arrival.

12:18 p.m. A walk-in reported the larceny of tools by a contracting company. Officer Moira McGaffigan took a report.

3:21 p.m. A caller reported a stop sign was missing from Frankland Road and Cross Street. Officer Preston Mucciarone responded and contacted the DPW.

4:58 p.m. A concerned jogger reported all the exterior lights on a Pond Street house were flashing on and off. Officer Tyler Brabham responded and spoke with the homeowner, who stated there was an electrical issue and he was awaiting an electrician.

5:55 p.m. Officer Preston Mucciarone checked on a disabled motor vehicle on East Main Street. The driver was waiting for a tow.

1:19 a.m. A representative from the American Automobile Association reported they cannot get in touch with a customer who called for auto assistance five hours earlier. Officer Brendon Lyver checked West Main Street and found the vehicle unoccupied and left a message for the owner.

3:25 a.m. The DPW requested assistance in moving a car that was interfering with snowplowing on Eastview Road. Officer Jay Deiana responded and contacted the owner, who moved the vehicle.

6:35 a.m. A walk-in reported a truck was off the roadway of East Main Street. The driver was OK. Officers Stephen Buckley and Brendon Lyver responded and found skid marks on the road, but the truck was gone upon their arrival. No property damage was found.

8:49 a.m. Sergeant John Porter assisted a person with an explanation of a violation on Main Street.

9:21 a.m. A caller reported a possible phone scam. No personal information was given to the scammer. The incident was logged.

9:55 a.m. A caller reported that while her son was driving to school he slid off the roadway and hit a mailbox on Fruit Street. A private tow was on the way. Officer Jay Deiana responded and took a report.

11:11 a.m. A caller reported a suspicious vehicle on Hayden Rowe Street. Officers Moira McGaffigan and Ryan Polselli responded and spoke with the operator, who was with a local news outlet and filming the effects of the snowstorm. All was OK.

11:24 a.m. A caller reported her son crashed his car on Spring Street earlier in the day, and the vehicle was off the roadway awaiting a tow. Officer Jay Deiana responded and took a report.

1:00 p.m. A caller reported a tree fell in to the roadway of Ash Street. Sergeant Aaron O’Neil and Officer Ryan Polselli responded and moved the tree and notified the DPW for cleanup.

1:47 p.m. A caller reported a delivery vehicle was stuck on a hill on Hidden Brick Road. Officer Moira McGaffigan responded, but the vehicle was gone upon her arrival.

2:24 p.m. Officers Benjamin Stickney, Ryan Polselli and Jay Deiana responded to a report of a school bus that was rear-ended on North Street. Officer Deiana took a report, and a vehicle was towed. Officer Polselli provided a courtesy transport to the driver to Westborough.

2:51 p.m. On Wood Street, a motorist reported a vehicle passed a school bus that had its flashers on. Officer Moira McGaffigan responded and checked the area with a negative find on the vehicle.

4:28 p.m. A caller reported a fallen tree was blocking the roadway of Pond Street. Officer Preston Mucciarone responded and found a car stuck in a ditch. Sergeant Arthur Schofield responded to assist along with the DPW.

8:13 p.m. A caller reported a plow truck was stuck in a Cedar Street driveway. Officer Preston Mucciarone responded, but the truck had already freed itself.

Man killed in wrong-way crash on...