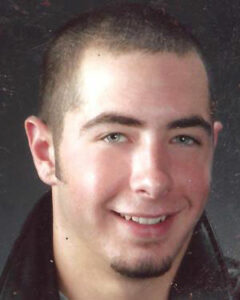 Victor Ambers, a former Hopkinton resident, passed away Nov. 21, at the age of 35. Our beloved firstborn, Victor, was lost to the scourge of drug addiction — the real biggest problem in America. Victor was a very smart, lovable person, and we will miss him terribly. He lived to fish, read, write and always wanted to “get better,” as we all hoped he would. His career goal was to help others struggling with the same mental health and addiction issues he fought for over 10 years.

He loved and leaves his son, Sawyer Quigley, and his mom, Katie, his parents, Paul and Lisa Ambers of Newport, Vermont, his brother, Curtis Ambers of Grafton, his Aunt Amy and Uncle Cliff of Lunenburg, his Uncle Larry and Aunt Terry of Hampton, New Hampshire, his cousins John Paul Senio and Liz Handscom, and his Grandma Marie of Peabody, plus many friends who all hoped would someday get him back. He was predeceased by his maternal grandparents, Nick and Genevieve Senio, and paternal grandparents, Alfred and Winifred Ambers.

A service was held Nov. 26 the Kraw-Kornack Funeral Home in Norwood (kraw-kornackfuneralhome.com). In lieu of flowers, donations in Victor’s memory can be made to the addiction recovery center of one’s choice.