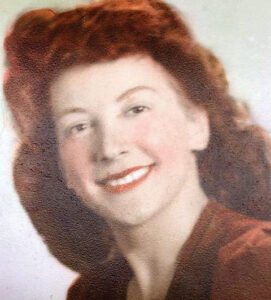 Gloria (Briglia) Webb passed away on Feb. 28 from natural causes. She was 95 years old. Gloria was born in Baltimore in 1924 to naturalized immigrant parents. Her father, Romolo Briglia, and mother, Carolina (Baldi) Briglia, came to the United States from Lucca, Italy. Gloria was the youngest of four children, including her late sisters, Marion (Briglia) Braun and Lydia (Briglia) Bennett, and her late brother, Anthony Briglia. She attended school in Baltimore, and met her future husband, the late Kenneth K. Webb, prior to his deployment to the European theater in World War II. They were married shortly after his return from service in 1945.

Gloria and Ken had the first of their four children, the late Jo Ann Webb, in Baltimore in 1946 prior to relocating to Ohio, where Ken pursued his higher education under the G.I. Bill. The family relocated to Massachusetts in 1956 to seek medical treatment for Jo Ann, who succumbed to kidney failure later that year.

Gloria lived a life of service. From volunteering in classrooms and leading religious education classes to serving as a school crossing guard and cafeteria lunch lady, Gloria loved helping children. She held a number of part-time jobs while residing in Framingham so she could be available to her family. When her husband received a job transfer to Phoenix, Arizona, Gloria began a 20-year career with the Southwest regional hamburger chain Whataburger. Gloria ran the breakfast shift at the Phoenix MetroCenter Whataburger franchise for several years. Her favorite part of the job was working with new hires and younger employees, helping them understand their roles and enabling their growth in the company. Gloria and Ken relocated to West Yarmouth in 1996 to be closer to their children and grandchildren.

Gloria was laid to rest at St. Stephens Cemetery in Framingham alongside her daughter, Jo Ann. Private funeral arrangements were under the care of Chesmore Funeral Home of Hopkinton (ChesmoreFuneralHome.com). In lieu of flowers, contributions to St. Jude Children’s Hospital, Gloria’s favorite charity, are appreciated.