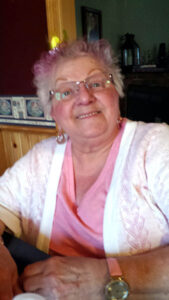 Former Hopkinton resident Patricia A. Rutkowski, 76, died Feb. 25 at St. Elizabeth’s Medical Center in Boston. She was the wife of the late Edward “Charlie” Rutkowski, who died in 1984. Born in Wilkes-Barre, Pennsylvania, she was the daughter of the late Joseph and Marium (Bubrick) Zagropski.

She is survived by her daughter, Donna Rowan and husband Gary of Milford, her sons, Thomas of Westborough, Gregory of Milford, and Wayne and wife Victoria of Bellingham, as well as seven grandchildren and three great-grandchildren. In addition, she leaves her sisters, Judith Toole and Susan Meade, and her brother, Frederick Zagropski, all of Pennsylvania, and her sister, Penny Cooper of Texas.

A funeral Mass was celebrated March 3 in St. John the Evangelist Church in Hopkinton, followed by burial in St. John’s Cemetery, Hopkinton. Services were under the care of the Callanan Cronin Funeral Home (callanancronin.com).