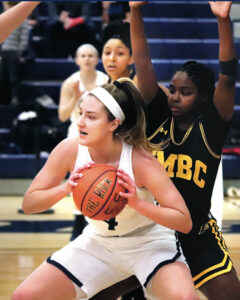 Former HHS standout Ivy Gogolin was named to the America East All-Rookie team as a freshman at UNH.

Ivy Gogolin made quite an impression during her first season on the basketball team at the University of New Hampshire. Not only did she gain the respect of her coach, Maureen Magarity, she won over a key member of her coach’s family.

“My 6-year-old, Charlotte, just idolizes Ivy, and I think that really speaks volumes about her character that even after a year, not even, all [Charlotte] could talk about was Ivy, Ivy, Ivy,” Magarity said.

Charlotte had good reason to look up to Gogolin. After playing sparingly in the Wildcats’ first eight games, the former Hopkinton High School standout moved into the starting lineup for 16 of the final 22 games, averaging 6.7 points and 4.7 rebounds (second on the team) and earning America East All-Rookie team honors.

“It was a great year,” the 6-foot-2 forward said. “It was a very fun season. As a freshman I didn’t really know what to expect. … The speed of the game is a lot faster and the overall strength of the opponents is definitely greater.”

Adding to the challenge was the fact that a number of UNH players went down with injuries, forcing Gogolin and others to have to contribute immediately. While the team finished with a 6-24 record (3-13 in conference play), Gogolin gives the Wildcats reason to hope that better days are soon ahead.

“A lot of us had to play in different roles that we weren’t expecting because we were unlucky with injuries this season,” Gogolin said. “We all adjusted and stepped into our new roles and did the best that we could.”

Gogolin praised the UNH coaching staff for her development over the season.

“They definitely helped me a lot with my back-to-the-basket moves, and also face-up game,” Gogolin said.

The highlight for Gogolin was not her 23-point performance in her first start, a 68-44 victory over the University of New England on Dec. 6, but rather her second start, the team’s 74-62 victory over Holy Cross. Although she only scored three points, she helped the Wildcats knock off a Holy Cross team that was 6-2 and on its way to an 18-13 season.

“We were definitely the underdogs in that game, and coming out with a win was amazing,” she said.

Magarity highlighted Gogolin’s selfless attitude, referring to how Gogolin would always ask, “What do I have to do to make the team better, and team, team, team.”

“She makes my job as a coach obviously a heck of a lot easier because she does whatever it takes and she’s just so selfless,” Magarity said. “Like you heard her say, she just wants to do whatever she can for the team. So she’s really special.”

This comes as no surprise to HHS coach Mike Greco, as Gogolin led the Hillers to the Division 2 state championship game her senior season and left her legacy on and off the court.

Looking ahead, Gogolin might have to battle for minutes again next season when some of the injured players return, but the future is bright.

“The sky’s the limit,” said Greco. “I think she’s going to keep developing and be a superstar for them.” 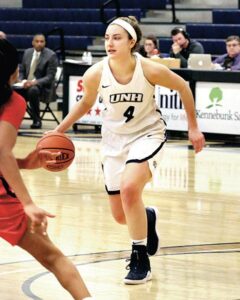 Ivy Gogolin was forced to take on a bigger role due to injuries to her UNH teammates, and she finished second on her team in rebounding.