But after town OK’s license, opponents petition for review 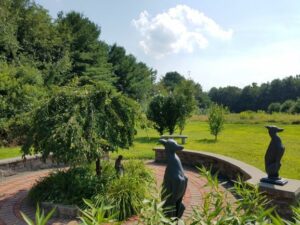 The Greyhound Friends facility on Saddle Hill Road has made major changes since it was shut down by the state.

Two years after being shut down by the state, and one year after the town denied a new kennel license, Greyhound Friends took a big step toward reopening its Saddle Hill Road kennel.

Deputy Police Chief Joseph Bennett performed an inspection of the revamped facility, reviewed paperwork — primarily adoption information that in the past had been missing — and submitted a satisfactory report to Town Clerk Connor Degan, who then approved a license.

As of Aug. 15 the group still needed to get inspected and approved by the Massachusetts Department of Agriculture before the state’s cease and desist order could be lifted.

“We’re just looking to resume operations for now and get things back up and running and continue with our education and advocacy for the breed,” new kennel and operations manager Teri Shepard said.

However, those opposed to the kennel due to past mismanagement and alleged failure to properly treat dogs in its care were working on a petition that would lead to a public hearing and, they hope, a decision by the Select Board to revoke the license.

The updated facility can house 15 greyhounds in redesigned, enlarged kennels. That’s fewer than half as many dogs that had been held at the facility in the past, when it was criticized for overcrowding, inadequate housing and overall poor conditions.

While the premises now are in acceptable physical condition, it is the personnel that has protesters upset.

Longtime executive director Louise Coleman, who was fired by the Greyhound Friends Board of Directors in 2017, no longer has a role at the kennel. She is barred from returning as per a governance agreement with the attorney general’s office. The board — which admitted to mismanagement and lack of proper oversight in the same governance agreement — has turned over as well, with Caryn-Amy Rose now serving as president. But there are people involved who were there when Coleman misappropriated funds for personal use and failed to maintain a sanitary environment that led to the kennel’s forced closing.

Shepard, for one, has worked at the facility for many years, which she and the board view as a positive.

That’s a red flag to someone like Beth Gallagher Malloy, a Hopkinton resident who was organizing a petition (25 resident signatures are required) that she said was to be delivered to the town clerk’s office on Aug. 19, forcing a public hearing before the Select Board. Last fall, at a hearing regarding the kennel’s initial attempt to regain its license, some members of the Select Board suggested the Greyhound Friends Board of Directors needed a complete turnover in order to receive support from the town.

Malloy insists that no one who worked at the kennel under Coleman and failed to act should be allowed to return.

“It’s not new blood, it just isn’t,” Malloy said. “A lot of the people that are there, including Teri Shepard, knew what was going on and looked the other way. She did. She knew that Louise was taking money.

“I’d like to see Teri Shepard especially go. She has no right being there, in my opinion.”

Shepard said she hopes to move forward and keep the focus on helping the animals, acknowledging that opposition has made it challenging.

“I don’t believe it is possible to appease them,” she said. “There are certain people that just won’t hear it. They just keep going to the past. We can’t correct the past, we can only apologize for what had taken place. I can say all of the dogs are accounted for, that was just a paperwork issue. We have a new record-keeping system that’s all digital, so those issues will not happen again. But the people that you’re speaking of, I can’t seem to appease them.

“Greyhound Friends has a huge community of supporters,” Shepard continued. “That’s what keeps us going. There are a lot of people who really believe in the mission of placing greyhounds into forever homes. So we decided that returning to that original mission and sticking with it, their support would still be there. And we all believe in it. There’s always going to be a need for these dogs. That’s where our passion is and we want to move forward with the mission. We have this beautiful facility that was purpose-built for greyhounds, and we don’t want to let it go.”

Malloy, however, said it’s time for a fresh start — with fresh faces.

“I would be happy if a rescue moved in there,” she said. “I just don’t think this is the right rescue. And there are a lot of people in this town that are dead set against them reopening because of their history. Do they deserve another chance? No, the really don’t.

“I don’t see them as having a future here in Hopkinton.”