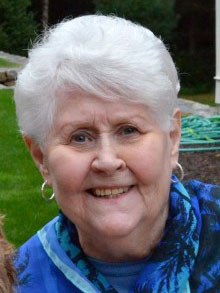 Phyllis (Pearce) Salyards 84, of Sandwich and formerly of Hendon, United Kingdom and Pitcairn, Pennsylvania, passed away after a brief illness on Aug. 3. Phyllis attended school in London, England, and it was in 1954 where she met her future husband and lifelong partner, Charles Salyards, while he was stationed at a naval base during the Korean Conflict. They married in 1955 and began a wonderful love story that lasted 56 years.

Phyllis worked in the insurance industry and was a waitress for many years. She also was a homemaker. Phyl was all about people. She had a wonderful sense of humor, loved talking and getting to know people and had a wonderful proper British accent for all to enjoy. She was quick to offer friendship to anyone who wanted a friend. She was a fantastic cook and lover of anything English. She was very proud of her heritage and also proud when she became a naturalized American citizen in 2003 at a ceremony in Faneuil Hall Marketplace in Boston. She was a devoted and proud nana to her five grandchildren and loved spending time in Plymouth with the Pearce clan. She cherished her daily phone call with Aunt Pete as well as having lunches with her friends from Highview and her niece Joanne.

Phyllis leaves behind a son, Chip Salyards, his wife, Wende and five loving grandchildren, Kylie, Logan, Paityn, Cole and Trent, all of Hopkinton. She also leaves behind a caring, loving and devoted sister-in-law, Jeanne Pearce of Plymouth, a wonderful brother-in-law, John Salyards of Marco Island, Florida, and many nieces, nephews, friends as well as extended family in the Pittsburgh area.

She is predeceased by her husband, Charles, her brother, Leslie Pearce, her sister, Edna Ruffo, and her sister-in-law Rosalie.

A private memorial service was held Aug. 15 and she was interred at the Massachusetts National Cemetery in Bourne with her husband, “Dookie.” Funeral services were under the care of Chapman, Cole & Gleason (ccgfuneralhome.com).

Donations in her memory may be made to Spaulding Rehabilitation Hospital Cape Cod, 311 Service Road, East Sandwich, MA 02537, or online at spauldingrehab.org/giving.