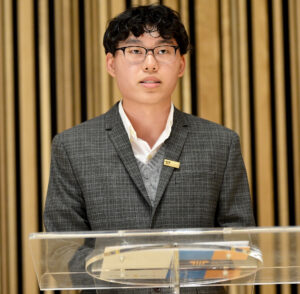 Hopkinton High School senior Kevin Gu’s way with words has taken him all the way to the national stage.

Gu is one of only five high school poets to earn the designation of National Student Poet, the nation’s highest honor for youth poets presenting original work. He will hold the title for a year.

“This is such an amazing honor,” Gu said.

The five poets represent separate areas of the country. Gu will represent the Northeast, the first student from Massachusetts to receive that designation.

Gu was officially appointed during a ceremony in September in Washington, D.C. “I met a lot of cool people and had an amazing experience,” he said.

One poem that earned him acclaim, “Red Gold,” addresses his Chinese heritage.

The poem examines the “rise in hate crimes against Asians,” he said. “I found poetry a way to release my anger and frustration.”

Writing the poem served as a “method of healing” and a “personal catharsis.”

With a release of words, he could share his “frustration with the way society is treating Asian-Americans.”

As part of his national award, he received a $5,000 academic award and will serve as a literary ambassador. This enables him to share his passion for literacy, poetry and the literary arts with the community.

Gu is working to develop workshops to share his love for poetry. Gu understands the importance of workshops. In the summer of ninth grade, he was one of only 20 students in Greater Boston selected to attend the teen writing class at GrubStreet, a nonprofit creative writing center in Boston.

“That’s where my love for poetry” was inspired, he said.

Gorman made poetry accessible, he said. “The way she presented it gave poetry a way into pop culture,” he said. “Poetry is a distilled version of literature,” he added of her work, “The way she delivered poetry as her own message of attacking oppression and rising above it really enhanced the emotional aspect of her story.”

He hopes that helps remind people that poetry doesn’t have to be a “daunting, intimidating subject” but can reflect relatable struggles and journeys.

In writing poetry, “I just find such a release,” he said. “When you’re writing a poem, you can be as raw and as vulnerable as you want.”

The National Student Poets Programs is a partnership with the Institute of Museum and Library Services and the nonprofit Alliance for Young Artists & Writers, which presents the Scholastic Art & Writing Awards. These awards are the longest-running and most prestigious scholarship and recognition program for the country’s young artists and writers.

“We are delighted to send these young people out into the world as ambassadors for poetry, for humor, pathos, and resilience, in partnership with museums and libraries,” Kemper said. “America’s communities need them, now more than ever — and here they come.”