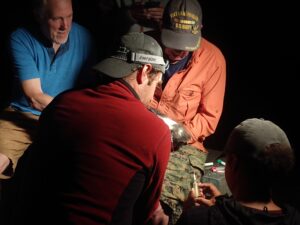 The team took to Lake Whitehall at night, sending a spotlight and a bird call across the water.

Savoy is the project manager of the Biodiversity Research Institute’s Loon Translocation Project. The project aims to restore loon populations, including those lost to the Northeast during the 19th century. Savoy said the common loon was targeted by hunters because they were seen as a threat to fishing.

“The breeding population of the state was completely wiped out,” said Savoy. “Not a single breeding loon, and there used to be a lot.”

So the institute began tagging loons to track their migration and breeding patterns. Savoy’s team visited Hopkinton twice over the summer, once in July and once in August, to capture the loons at night. By mimicking another loon, they spurred the territorial birds to leave their nests and protect their young. Once the birds reached the boat, Savoy and his fellow scientists tagged them with individual color combinations.

Their second visit later in the summer was to track the babies, who were too small to tag in July.

Savoy said Massachusetts is the last New England state to struggle with its loon population, and his team hopes to change that. By tagging the loons, the researchers can determine how many return to their breeding waters after migrating to the coast. Savoy said they won’t typically return to their lakes until they’re 3 years old.

“And a lot of chicks just don’t make it,” said Savoy. His data shows that only 40 precent of baby loons who leave their lakes in the fall will return as adults.

Those that have returned to their lakes have populated Central Massachusetts.

“They’re just not dispersing to the eastern part where our translocation project is,” Savoy said, “and there’s a lot of really nice lakes there, like Whitehall Reservoir in Hopkinton.”

“Just through coincidence we met some lake residents as part of our work,” explained Savoy, which led to locals reporting sightings to his regional biologist.

Mary-Anne Guild lives on Whitehall, and she heard about Savoy’s work on the news. She contacted him to let him know about the loons that arrived in her area in the summer of 2020.

“Actually my husband told me, ‘I think I saw a loon,’ and I said, ‘No, loons aren’t this far east,’ ” Guild recalled.

“We’ve been here for over 40 years,” she added. “My husband and I were so excited to see a pair of loons take up home here.”

Guild called them “pandemic loons,” and said they were a joy during days otherwise absorbed by COVID.

“I called it poetic,” said Guild. “It’s hard to find the right word. It was such an interesting experience to watch them develop in what was kind of a dark summer.”

So Guild, along with her neighbors and friends who frequent the lake, began exchanging notes on the birds and reporting to the project.

“They provided just observational data, which is very helpful for us,” said Savoy. “Because we can’t possibly hit every lake in the state of Massachusetts every summer.”

The project has been working to establish a network of volunteers like Guild, people who visit the lake every day.

Savoy’s project works in collaboration with the U.S. Fish and Wildlife Service, the Massachusetts Department of Conservation and Recreation, and the state Division of Fisheries and Wildlife.

“The overall goal at the end of this project is for the state of Massachusetts, MassWildlife, to take over our role of monitoring loons in the state and heavily rely on volunteer networks too,” said Savoy.

Savoy said all over the state, people are calling in reports of loon sightings and contributing to the translocation program.

“Like the folks in Whitehall Reservoir,” said Savoy. “It gets people invested. They feel like they’re really helping, which they are.”

Loon sightings can be reported to the Biodiversity Research Institute’s Loon Program by calling Lucas Savoy at 207-839-7600, ext. 104.