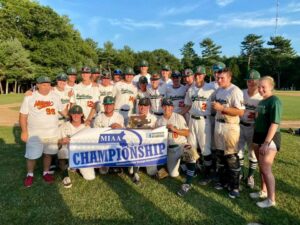 Hopkinton will play D2 North champion St. Mary’s in the state championship game later this week (there are no Division 2 teams in the Central or West sections, so there are no semifinals as there are in the other divisions). As the higher seed and with a better record, Hopkinton appears likely to host the game, but the MIAA did not immediately announce a date and location for the contest. Update, Tuesday, 3 p.m.: The state final will be Thursday at noon at HHS’ turf field.

Fischer, who will pitch for Fairfield University next year, tossed a complete-game shutout, allowing just four hits with seven strikeouts.

In the top of the fourth, Ronnie Shamus was hit by a pitch and Matt Cooper walked. With two outs, Jerrett delivered an RBI single to left for what would prove to be the winning run.

In the seventh, Mulvaney singled, advanced to second on a passed ball, and scored on a single to right by Kelly.

Hopkinton, seeded fifth, will take a 16-3 record into the state final. Second-seeded Milton finished its season at 17-3.