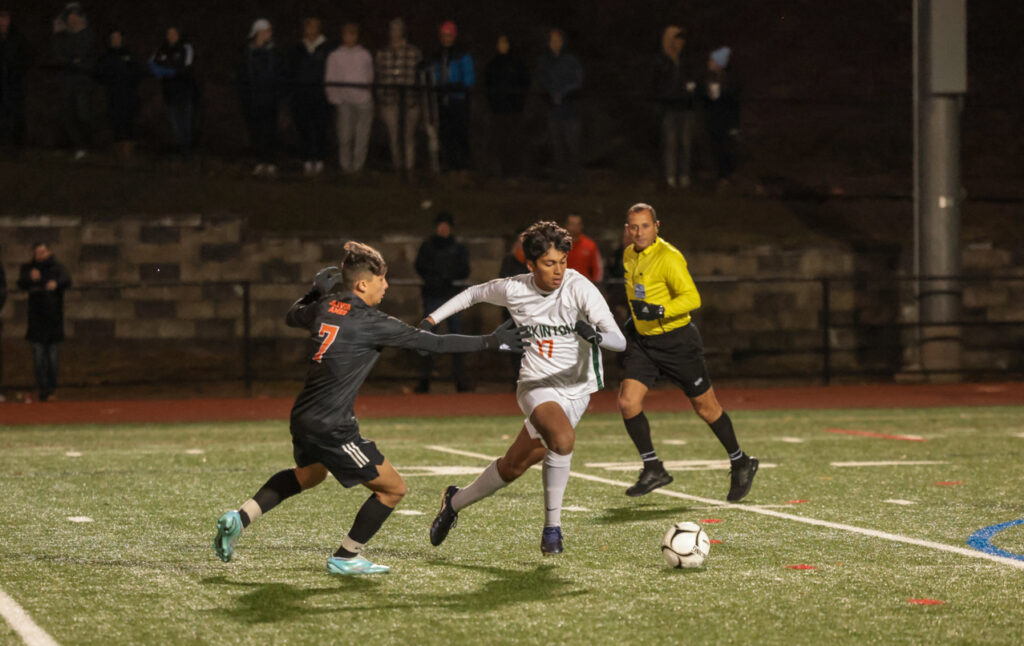 Capping a postseason filled with dramatic finishes, the Hopkinton High School boys soccer team had one more thriller Saturday night in the Division 2 state championship game. Unfortunately for the Hillers, this result did not go their way, as top-seeded Oliver Ames scored twice in the final three minutes to grab a 3-2 victory and the championship trophy.

“I’m feeling sorry for the team right now,” Hillers coach Garrett Sawyer said. “They put so much into this game, and I thought they deserved a chance to win.”

Second-seeded Hopkinton (19-2-2) won its first two tournament games in extra time, followed by a win over Wayland on penalty kicks in the quarterfinals. The semifinal, a 4-3 victory over Bedford, featured a flurry of goals in the final minutes as Hopkinton held on. It made for a memorable postseason, despite the final result.

“There is no particular moment that is going to stand out — just being a part of this experience,” Sawyer said when asked to reflect on the run.

While the Hillers had their opportunities Saturday, in the first half it was the Tigers who controlled the majority of the play. If not for HHS goalkeeper Max Nye, the game could have been a rout. The senior was brilliant, making some phenomenal saves to keep the Tigers off the board and keep the game scoreless heading into halftime.

However, Nye was victimized twice in the final three minutes of the contest. Hopkinton had taken a 2-1 lead, but Oliver Ames (20-1-2) knotted the score with 2:49 left on the clock on a header by Hector Bucio. With under two minutes to go, Oliver Ames sophomore Casey Milliken got free about 20 feet in front of the goal and lofted a ball that went over Nye’s head and into the net for the victory.

“It was an unlucky loss, but we were glad to be here in the first place,” a dejected Nye said. “It is what it is [on the game-winning goal]. I think that we were the better team and should have won. This performance shows that we have what it takes, and in the future we can win one.”

Following the scoreless first half, Hopkinton got on the board 1:35 into the second when Will Bialobrzeski hit Sean Golembiewski with a beautiful pass and the Tri-Valley League MVP deposited the ball in the back of the net like he has done so many times this year.

The Tigers finally managed to beat Nye at the 19-minute mark to tie the game, but it was Golembiewski once again who helped put the Hillers back on top a little over six minutes later. After working the sidelines brilliantly and maneuvering around Oliver Ames defenders, Golembiewski found classmate Peter DeMichele in front of the goal, and DiMichele converted to give Hopkinton the lead once again.

“Sean’s been double- and triple-teamed but always seems to come up with something for us whether it’s an assist or a goal, he’s been strong all year long,” Sawyer said.

Hopkinton had a few more chances down the stretch, but it just wasn’t to be, and the Tigers held on to win the title.

After making their first-ever state championship appearance, the Hillers are looking to take this game and build on it.

“It says a lot about this team that we were able to get this far,” Sawyer said. “The guys have a lot of talent and character and made our school and community proud.” 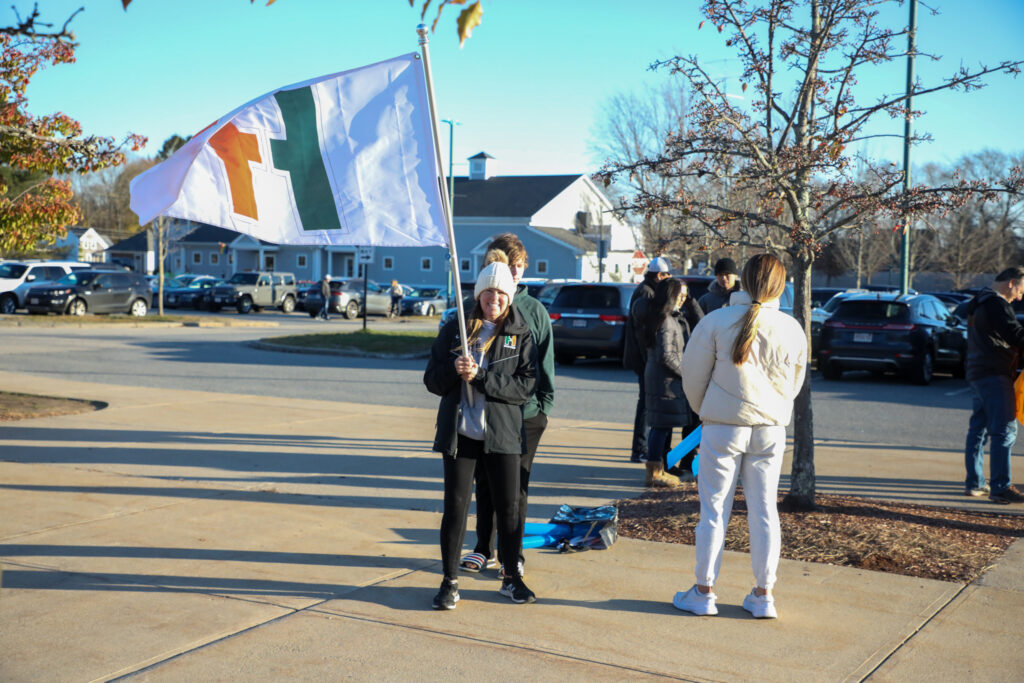 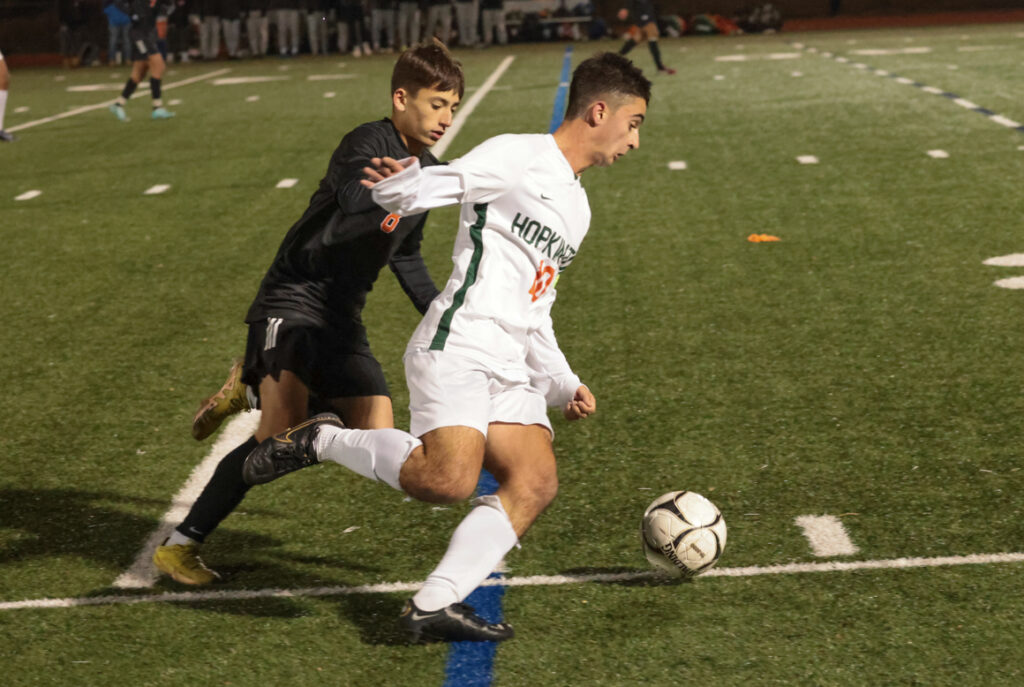 Peter DeMichele has a step on a defender. PHOTO/JOHN CARDILLO 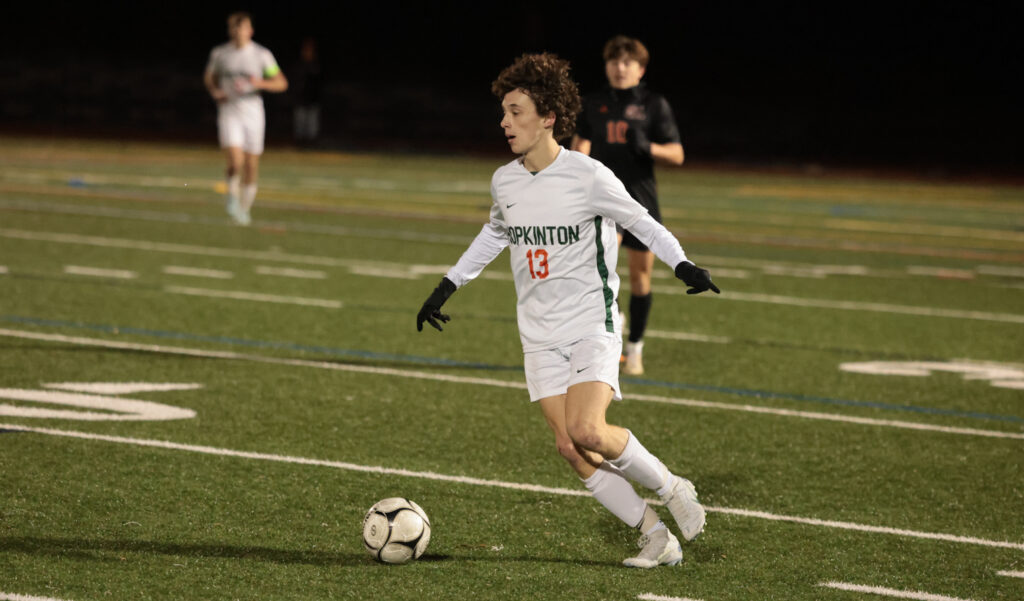 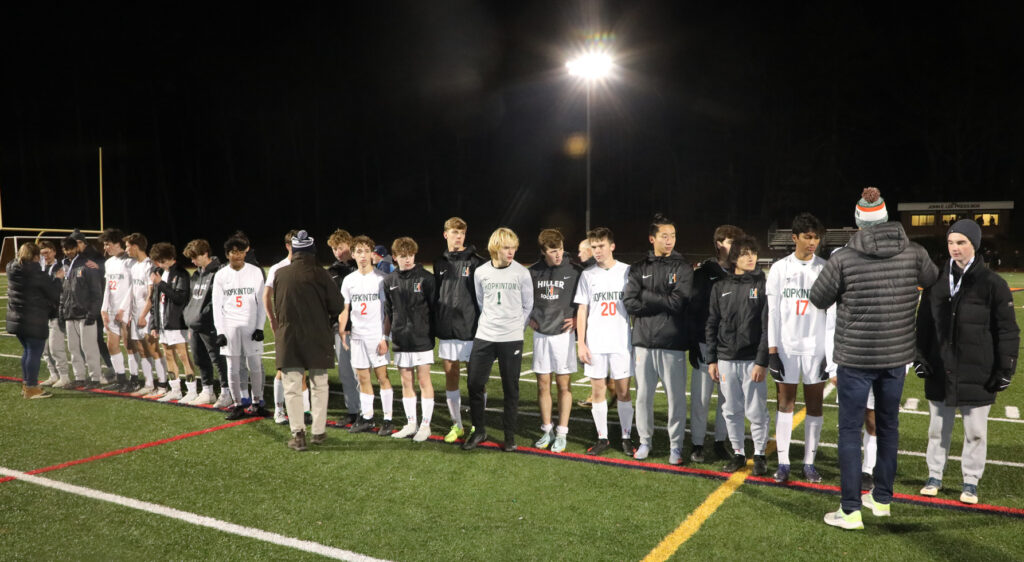 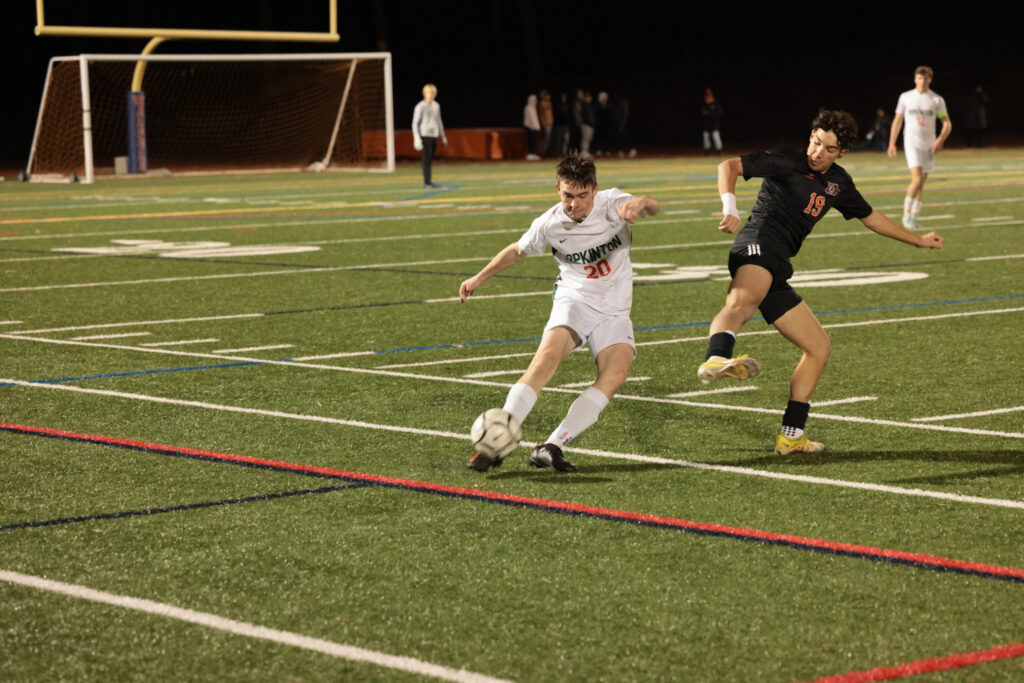 Sean McCann boots the ball up the field. PHOTO/JOHN CARDILLO 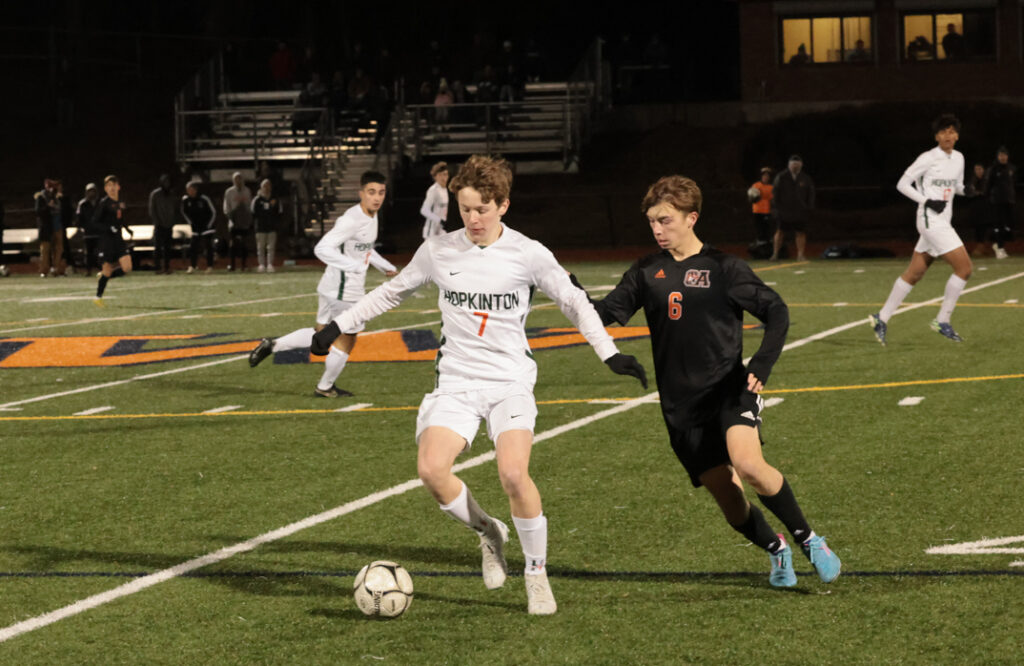 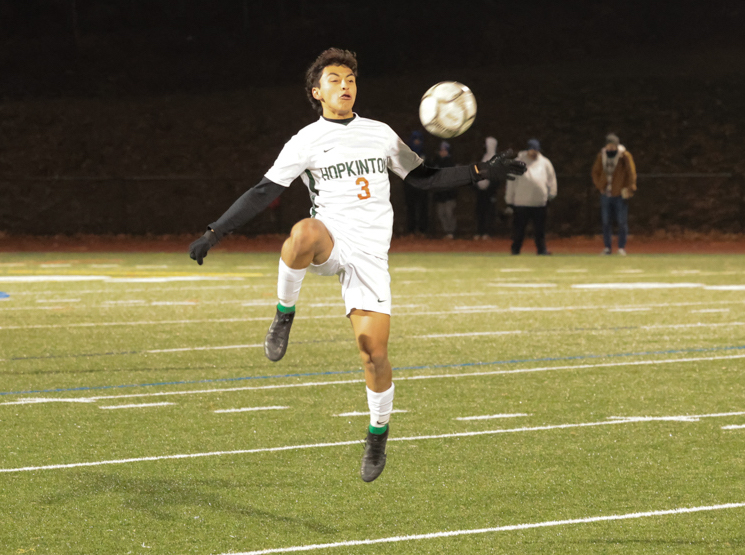 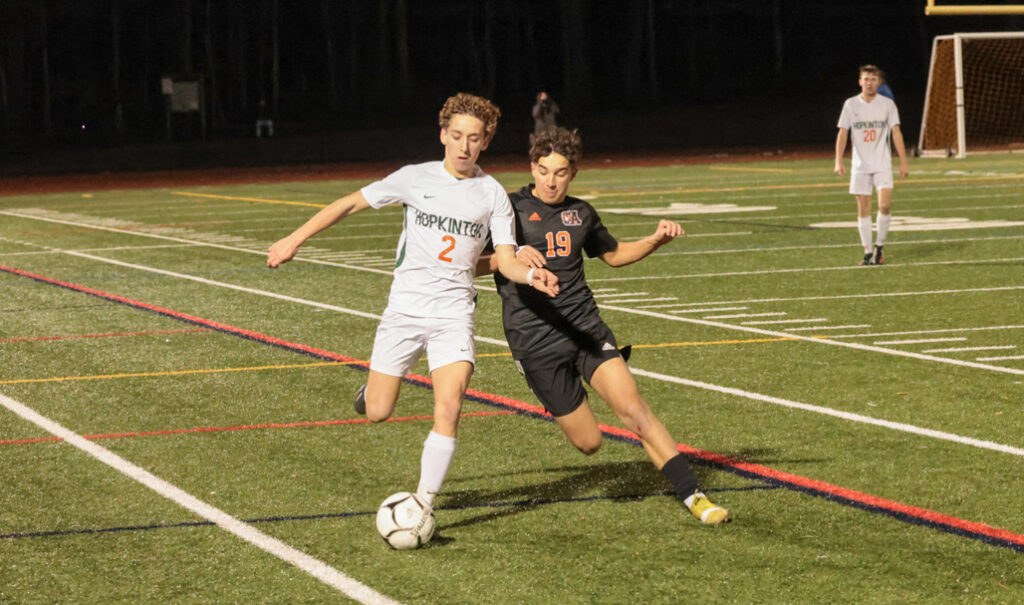