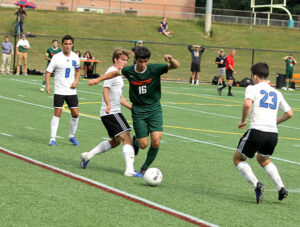 Hopkinton High School senior Tim Fargiano dribbles through traffic during a game last month against Dover-Sherborn at the turf field.

After graduating 13 seniors from a team that qualified for the state tournament in 2018, the Hopkinton High School boys soccer program has its sights set on getting back to the postseason with a new cast of characters in the spotlight.

With so many players who are either new to the team or new to starting roles, coach Garrett Sawyer said the leadership shown by his four senior captains has been a highlight through the first third of the schedule.

“I see that leadership as a strength because it creates a positive team culture and sets a good example in terms of having a positive attitude and getting better every day,” Sawyer said.

Nick Skiba, Owen DiNicola, Tyler Zanini and Tim Fargiano have answered the call to be leaders for the Hillers this fall. Skiba has played on the defensive side of the field primarily but has been willing to shift positions when needed.

“He is a really hard worker and he is willing to do whatever it takes or play wherever I want him on the field,” Sawyer said. “I have moved him around a bit and he has responded.”

DiNicola similarly has been moved around the field to different spots, seeing time both on defense and attack. Saywer extolled the senior as a positive leader who has been vocally picking people up throughout the season.

Zanini has also shown a team-first mentality by being willing to step aside from the starting goalkeeper spot for junior Patrick Crantz and find ways to contribute elsewhere on the field.

“He hasn’t skipped a beat in terms of doing what it takes to win and make progress as a team, even though there is a younger guy starting ahead of him,” Sawyer said. “That shows great leadership.”

Sawyer praised Fargiano for his intelligence on the field and the unselfish style of his game form the center midfield position.

Sophomore Owen Schnur has stood out among the underclassmen.

“I think he has the maturity of an older player,” Sawyer said.

The Hillers posted a 2-2-2 record through the first six games of the season after finishing 10-6-4 a year ago. This year’s group is focusing on establishing its own winning track record.

“We had a really good season last year, a strong, winning record,” Sawyer said. “With so many guys graduating, people wonder, ‘How are they going to do with all these guys leaving?’ So for the seniors this year it’s about proving they can be successful as well.”

Success equals a sectional tournament berth, not an easy feat in the competitive Tri-Valley League.

“We have a tough league, the teams are good, the competition is good, it’s a good measuring stick to be at least .500,” Sawyer said. “I think there is a lot of room for improvement this year because so few guys started last season, so individual progress is also a goal.

“I have a group of players who want to work hard,” the coach added, “and we are getting better every week.”