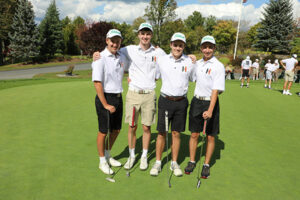 In his 40th season as coach of the Hopkinton High School golf program, Dick Bliss once again is enjoying leading a strong team anchored by an exceptional talent.

The Hillers won seven of their first eight matches, after running the table a season ago, and have their sights set on competing for a third straight Division 2 state championship.

“I have been blessed with great players,” Bliss said, summing up the program’s success.

The notion certainly applies to professional talents like Keegan Bradley, the winner of the 2011 PGA Championship, John Curran and Jimmy Hervol, who recently turned pro after a standout career at UConn. But it’s also fitting for the 2019 incarnation of the Hillers, led by William & Mary-bound senior Matt Epstein.

“He is right on the same page as Keegan and John and Jimmy,” Bliss said of Epstein, who shot under par in all but one of his first eight rounds of the year and posted a 33 average through the first half of the schedule.

“He has put in the time, the commitment, and he has a passion for this game,” Bliss said. “His parents have given him the resources he’s needed to be successful. You never know, he hopes to make it on the tour someday, that’s his ambition.”

While Epstein, already a two-time Tri-Valley League MVP, is leading the way, the Hillers boast enough depth to make noise at the league, sectional and state level.

Senior Ned Dean has been averaging around 37-38 for a nine-hole round and junior Ryan Lundy also routinely breaks 40, checking in with a 38 average.

Calvin Rodman and Geoff Tocco, along with sophomore Jack Petruney, are averaging around 40.

For the second season in a row, Hopkinton was invited to play at Cape Cod National in an invitational tournament for the previous year’s state champions and runners-up in multiple divisions. Hopkinton took sixth in the Sept. 21-22 tournament, with Epstein tying for 10th place individually.

The Hillers graduated eight seniors from last year and have a senior-laden roster this fall as well, but Bliss kept a dozen freshmen in the program. The class of youngsters is one of the largest he has ever had. Altogether Hopkinton has 28 players in the program, with about a dozen on varsity and the rest competing at the JV level. Bliss said he needed to cut more than a dozen players interested in being part of the perennially successful team.

Before challenging the best in the South sectional and state tournaments, Hopkinton has some work to do in earning a share of the TVL crown. The Hillers suffered their first regular-season loss since 2017 with a setback at Westwood in mid-September.

Hopkinton will see Westwood again on Oct. 16, this time at home at the Hopkinton Country Club. Bliss expects a lot to be on the line.

“I think they are going to run the table and I think we have a good shot of running the table and it will come down to that match for the league title,” he said. “Hopefully we can win it to make it a tie.”