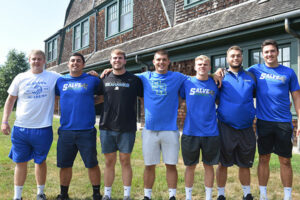 A tradition of producing talented football players and a college program that has produced a positive experience for those who attend has led to a steady pipeline of Hopkinton High School graduates making their way to Salve Regina University, including seven members of this year’s roster.

“Our coaches call it South Hopkinton, that’s the a joke among the team because, at one point, we had nine guys on the team,” said senior captain Nick Poillucci, a defensive lineman and HHS grad who joined the Salve Regina program when there were already multiple Hillers on the roster.

“I was a little hesitant when I first came here, I wanted to meet new people and not just be friends with the same people from high school, but the worry left in the first week,” Poillucci said. “It’s been great to play with the guys again and see how we have all gown as individuals.”

The biggest recruiting boon for the Seahawks when it comes to landing Hillers is word of mouth. Poillucci had heard about the program from former high school teammates, including Haiden Pereira, a Salve Regina graduate student and a member of this year’s defensive backfield.

Poillucci, along with senior defensive lineman Jack Guelfi, spoke with 2019 Hopkinton High graduate Kyle Stukel, who arrived at the campus in Newport, Rhode Island, this fall.

“I talked to Jack and Nick, I came to a couple of their games and watched them play,” Stukel said. “They told me how much of a brotherhood the football team is is and how tight knit the community is at Salve. That was just what I wanted in a school.”

Having other Hopkinton players in the pipeline isn’t the only thing bringing more Hillers to Salve Regina. The courses of study offered by the school, the size and the setting in the shadow of beautiful Gilded Age mansions are all significant draws, but Stukel said having former teammates at the school has made a difference in his first few weeks of college.

“I had some people to help me through the process and I had my friends coming up with me to be with as well so I am not just alone,” he said. “It’s made the transition so much easier.”

Salve Regina coach Kevin Gilmartin is in his eighth year with the program and remembers the run of Hopkinton players starting with wide receiver Alex Hulme, a 2012 HHS graduate who went on to set multiple records in college. There has been a steady stream of Hopkinton players ever since.

“First off, we are getting very good players, and secondly, we are getting leaders, we have had captains come through,” Gilmartin said. “It’s the culture, the characteristics of Hopkinton, the personality, it breeds well with what we have going here.”

A former head coach at nearby Nipmuc High School, Gilmartin has been familiar with the Hopkinton program for some time. One of the traits he has noticed over the past several years is that the former high school teammates are frequently pushing each other to be better players.

“As soon as they come in as freshmen, one, the older guys want them to be above and beyond all the other freshmen coming in,” the coach said. “They are Salve football but they are also Hillers.”

Gilmartin said the Kelleher brothers are a good example.

“Jake was leaning hard on Ryan the first couple of days to make sure he is always trying to be as perfect as possible,” Gilmartin said. “It’s kind of awesome to watch them they do that, they take pride in one another.”

Guelfi, a senior defensive lineman, said being a former Hiller also means having to live up to the guys that came before.

“When you come from Hopkinton, you’re expected to play pretty early on,” he said. “You feel that pressure.”

But the stress of expectation is eased by having so many familiar faces in the locker room right away.

“The upperclassmen have been really good to the younger guys,” Guelfi said. “It’s been easy for everyone to come in and feel comfortable and feel at home.”