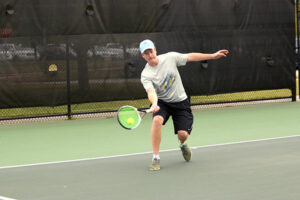 Ben Daly returns a shot during his semifinal match of the Hopkinton Tennis Tournament on Sept. 15. Daly went on to win the advanced men’s singles and doubles title.

Ben Daly was a winner in the advanced men’s singles and advance men’s doubles divisions of the 12th annual Hopkinton Tennis Tournament, which was held Sept. 13-15 at the Hopkinton High School courts.

Daly defeated Austin DeLasse in the singles final, 6-2, 6-1, then paired with DeLasse to roll to the doubles title.

HHS VB off to strong start

The Hopkinton High girls volleyball team cruised through the early part of its season, winning its first seven matches. The highlight came on Sept. 13 when the Hillers knocked off 2018 Division state finalist Barnstable in a statement win. The stands were packed at HHS to see the two powerhouses face off, and the home team did not disappoint. Senior setter Angie Grabmeier had 22 assists, nine kills, nine digs and 17 service points to spark the win. Senior middle blocker Ashley McDermott had six kills and five blocks, while senior libero Morgan Allen contributed 22 digs and solid passing.

In a visit to Hingham on Sept. 20, Hopkinton fell 41-23. Quarterback Robby Bernardin threw two touchdown passes, one to his brother, Tommy Bernardin, and the other to Brian Keefe. Junior running back Cam Mulvaney rushed for the Hillers’ final TD.

In the opener at Wayland on Sept. 13, the Hillers dropped a 23-20 decision. Mulvaney scored all three Hopkinton touchdowns. He rushed 16 times for 61 yards and two TDs and caught five passes for 93 yards, including a 73-yard TD catch. However, Mulvaney was stopped short on fourth-and-goal from the 1-yard line with four minutes left in the game as Wayland held on for the win.

Gaughan had four shutouts and a 0.57 goals-against average through the team’s first seven games, helping the Barons to a 5-1-1 record.

Hopkinton golfer Abby Jaye competed in the 116th Massachusetts Women’s Amateur Championship in August. After shooting a 91 in the first round, Jaye came back with an 83 in Round 2. However, she missed advancing to match play (top 32 golfers) by one stroke.

Jaye, who represented Hopkinton Country Club, is a freshman at Stonehill College.