Paying it forward after cancer-free diagnosis

Editor’s note: In the previous issue of the Hopkinton Independent there was an article on 5-year-old cancer survivor Brody McDermott. The following is an excerpt from his mother’s blog post about her experiences celebrating his cancer-free diagnosis.

By Lindsay McDermott
Special to the Independent 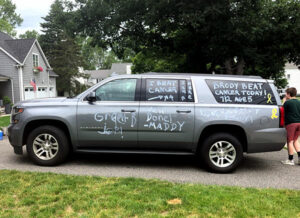 When Lindsay McDermott and her family painted messages on their car celebrating a cancer-free diagnosis for 5-year-old Brody, it led to an outpouring of support from the community and beyond.

Not sure if you have seen my car around Hopkinton or maybe even on the interstates all over New England, but we have decorated our car with window paint proudly telling the world that BRODY IS CANCER FREE.

Bro loves the honks, the thumbs-up and the happy waves we get from other drivers. Truthfully, I do too.

On the way home from the hospital on the day the doctors said he/we were free of the Beast, a woman at a stoplight frantically had us roll down our window. She handed us a $100 bill. I begged her to take it back, but she jumped in her car, the light turned green and she bolted forward and then down a side street. She wanted us to go out and celebrate. We did. Obviously, it was unexpected and I never thought that would happen. Truthfully, I was a little embarrassed, but I recognized the generosity of this woman.

The very next day, a letter was stashed under our windshield in front of our house. It was a letter that made me sob and at the same time feel so much joy. [The person] wrote that Brody was an inspiration to them as they ran by, part way through a long slow incline. The runner said that it pushed them through to the end. Brody’s fight and victory gave them strength.

We have walked out of the grocery store and Target to find other letters tucked in conspicuous places on our car. Little messages scribbled on old receipts and crumpled grocery lists.

There are those who have chosen to give small items of congratulations. I am grateful for them. The anonymous gift cards and most recently a scratch ticket that had already been scratched to reveal a $4 winner.

I took the car to the car wash, hoping I might be able to get the paint off. The car wash attendant started to sob. She said she had a son who was 5 as well. She couldn’t even imagine. She asked if she could hug me — a stranger wanted to share in my joy. We both cried. We’re both mothers. We felt a kinship even though I would never see her again.

The paint has taken on a whole new meaning for me. It’s my inspirational project.

There is a connection to humanity that I needed after all of this turmoil. A belonging to something bigger is something I think we all innately strive for. We don’t want to be alone, but in the cancer world, your only connection is to other fighting parents. People on the street cannot even fathom the depths of this disease, and it is very isolating. In this situation, I would venture to say that for many others there was a connection to a bit of grief and, hopefully, a gratitude that welled up that they hadn’t been touched by pediatric cancer.

All the good deeds of so many people make me want to give back so much more than ever. I will brightly smile and tell someone to have a good day when I pass them on the sidewalk. They often look at me like I have 10 heads, but it’s all good. I think a smile and well wish is contagious. Maybe they might smile to another soul on the street and pass it on. I have dropped a  5 in a tip jar, when in the past I might have just dropped my change in the form of coins. Who knows what they need that money for? I have given small grocery gift cards to people on the street. I have started to pay it forward whenever I pull through a Dunkin’ Donuts because you never really know what the person behind you in the drive-thru is going through on that day, that year. Maybe they need a touch of humanity to know that they aren’t alone. Maybe they even have a kid who has pediatric cancer.