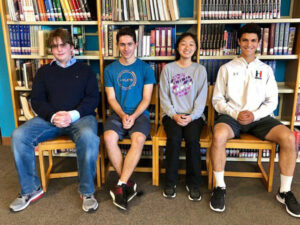 To become a finalist, the semifinalist and a high school official must submit a detailed scholarship application, in which they provide information about the semifinalist’s academic record, participation in school and community activities, demonstrated leadership abilities, employment, and honors and awards received. A semifinalist must have an outstanding academic record throughout high school, be endorsed and recommended by a high school official, write an essay, and earn SAT or ACT scores that confirm the student’s earlier performance on the qualifying test. Finalists will be notified in February.

Superintendent Dr. Carol Cavanaugh emailed the Hopkinton Public Schools community on Sept. 25 to share that the district received a threat, but it was not determined to be credible.

Wrote Cavanaugh: “Overnight, the school district received a threat that warranted the involvement of the Hopkinton Police Department. The Police have checked in with the intelligence community as well as with the New Bedford Police Department, where the alleged aggressor resides.

“At this time, we do not feel that the threat is credible. That said, we will have increased police presence in all of our schools today.

“Schools will proceed with their normal operations.”