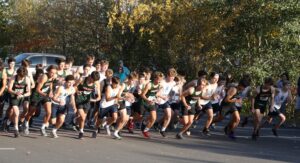 Hopkinton High School boys runners take off at the start of a recent meet at Hopkinton State Park. PHOTO/JOHN CARDILLO

Cross country often is perceived as an individual sport, but the Hopkinton High School boys team has taken on a team-first attitude this fall. The result has been a perfect record in Tri-Valley League competition.

“It’s contagious, everyone wants to train hard and do better and they really think team first,” said coach Laura McKenzie. “For them, it’s a team sport. We need that depth and we need to keep fostering the love of running and competing, and these kids are doing that. They just want everybody to do their best.”

The Hillers graduated 22 seniors from last season, but McKenzie knew she had a strong pack of runners coming back.

Junior captain Craig Salois consistently has been in the top spot for Hopkinton during the dual meets this year.

“I think coming into the season we had some high expectations and we have been meeting them,” Salois said. “I think we are a strong team where we all want to run our best and we all push each other to run fast.”

Salois is one of four captains on the roster, along with fellow junior Lex Kaye and seniors Jake Lacoche and Matt Burdulis. Kaye and Lacoche, along with junior Wyatt Ruff and sophomore Ben Scott, often have traded places in the top four from meet to meet.

“They were coming up together, and I think over the past few years the older kids in the program have really mentored the younger kids,” McKenzie said. “Whether it’s sharing their love of running or training, they help make everyone else better.”

Salois said it’s just more fun when the team is winning. He added that he is embracing the role of a captain in his first year in the leadership position.

“I like being able to lead by example and show the other guys what it means to try to win and keep winning,” he said. “Hopefully we pass that attitude along to the future runners.”

Added Kaye: “I try to run with the younger guys as much as I can to get them to push themselves harder. A lot of them are really getting better.”

Junior Cole Deisenroth has been a strong runner this fall. Sophomore Connor Dorfman missed two weeks of the season but has worked his way back to become a presence in the Hillers’ top 10. McKenzie also highlighted the performances of freshmen Stephen Leighton, Sam Dadagian and Torren Epstein.

“They have raced really well and will continue to improve training with the upperclassmen,” she said.

Kaye said Hopkinton was hoping to place as many runners as possible in the top 10 at the Oct. 23 league meet and also qualify for the all-state meet. Like many of the Hillers’ runners, he took to the sport at an early age.

“I joined the program in middle school because my friends were doing it and I just really enjoyed it,” he said, adding that McKenzie has been a big reason why he’s kept running. “She really made me fall in love with the sport and I just kind of stuck with it.”

McKenzie acknowledged that her team will have stiff competition for spots in the all-state meet but believes the Hillers have a shot to compete with the very best. The team succeeds because of its leadership, she said, pointing specifically to Burdulis, who continued to make a significant contribution even when he was injured.

“He has taken on this role of bringing up all the other kids and it’s something I have been really impressed with,” McKenzie said. “The way they cheer on their teammates, even the runners at the back of the pack, it’s really nice. They are always thinking of the team.”