By Davide Farinacci
Special to the Independent

On Oct. 11, a group of Hopkinton High School students had the opportunity to get hands-on experience contributing to a television broadcast and, in return, WBZ Channel 4 got firsthand information about the Boston Marathon to pass onto viewers.

The Hopkinton High School cross country team joined other students from the MetroWest area as spotters, standing by mile markers along the route and informing the media which runners were in the lead. 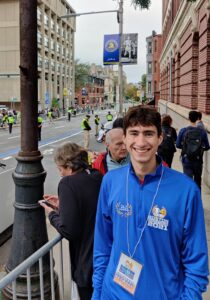 Matt Burdulis was one of the Hopkinton High School students who helped with WBZ-TV’s coverage of the Oct. 11 Boston Marathon by serving as a race spotter.

The race spotters program was established in 1985 by running coach Fred Treseler and Hopkinton’s Tim Killduff, a former Boston Marathon race director who provides commentary for WBZ. HHS has participated several times since the program’s inception.

This year, Treseler and Killduff trained the Hillers to be spotters for the long-awaited 125th edition of the race. In the past, the training took place at the WBZ studios, but COVID restrictions led to the session being conducted in the high school library.

HHS cross country captain Matthew Burdulis was one of the spotters on the last turn of the marathon, where the course turns from Hereford Street onto Boylston Street, just a half-mile from the finishing line.

Burdulis grew up in a family of runners. His father, Mike, has run nearly 20 Boston Marathons while his mother, Sharon, has run it a couple of times. For the Burdulis family, spotting is a family tradition.

“The event was quite stressful at times, because there were some tight finishes,” Burdulis said. “But overall, it was a lot of fun. I was definitely excited because I was [involved] in it now more than I had ever been before.”

This year the students employed mobile phones instead of radios to connect with WBZ, using a set protocol to speed up communication and minimize misunderstandings.

“You need to announce positions as the runners are approaching your point and then say ‘mark’ when they’ve reached you, confirming their bib number to the studio,” Burdulis explained.

While this process sounds straightforward, in practice the excitement and fast pace make it challenging.

The new protocol adopted this year has been regarded as an improvement over the past, as Treseler said the WBZ studio team indicated it was quieter and more efficient.

“Necessity is the mother of invention,” Treseler said. “The new protocol was created to stay within the personnel limits in the CBS studio, due to CBS corporate COVID-19 policy. We had to decrease our staff by 33 percent. Yet, the information and off-camera reporting demands stayed the same.”

Davide Farinacci is a Hopkinton High School foreign exchange student from Italy who is a member of the cross country team.