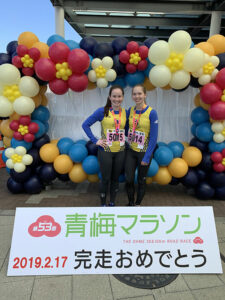 Hopkinton High School runners Kayla McCann (left) and Amanda Hansen traveled to Japan to compete in the Ohme-Hochi 10K in February as part of a Boston Athletic Association exchange program.

Two Hopkinton High School cross country athletes had the run of their life this February — a run that began close to 7,000 miles away from home.

HHS senior Amanda Hansen and junior Kayla McCann were chosen to be representatives of the Boston Athletic Association at the Ohme-Hochi Road Race, a sister race to the Boston Marathon, in Ome, Tokyo, Japan. Since 1975, the Ohme-Hochi Road Race and the BAA have traditionally exchanged athletes and ambassadors “as a way to celebrate each race’s respective culture and connection.”

“We were in such shock,” McCann said of receiving the call that she and Hansen had been chosen by the BAA after being nominated by their coach, Jean Cann. “We didn’t want to get our hopes up, but it was so amazing when we heard the news.”

The athletes flew to Japan during February vacation with BAA translator Kay Horichui. As soon as they landed, the girls were welcomed with open arms and were treated like “royalty” during their stay.

For the days leading up to the race, the girls were immersed in Japanese culture, taking part in traditional cultural experiences such as making pottery and glasswork, meeting the mayor of Ome and eating in authentic Japanese restaurants.

A highlight of the trip for both girls was a visit to a local middle and high schools, where they spent the day with the students taking classes and learning about how the schools differ between the two countries.

“I loved meeting people our age and seeing what school was like for them,” McCann said.“They were so kind to us and treated us like celebrities.”

Added Hansen: “The kids were just so excited to see us, even though they didn’t even know us.”

Their status as honored guests spilled into the opening ceremonies, where they were greeted by local officials and got to meet elite American runner Rachel Hyland.

After spending a few days in Japan acclimating to the time change and meeting new friends, on Feb. 17 the two athletes made their way to the starting line for the 10K race.

“It was amazing. I was smiling for the whole first two miles of the race,” McCann said. “It was such a cool experience from start to finish.”

For Hansen, who had never run a 10K (6.2 miles), the experience was unlike anything she ever expected.

“It was a lot different than I thought,” she said. “The scenery was beautiful, and it was quieter than I thought it would be. People were clapping and waving signs but not cheering too loudly. It was very peaceful.”

And although the girls weren’t out to break any records, they were both pleased with their finishing times — Hansen clocked 48 minutes and McCann was three minutes behind.

“We did a lot better than we thought we would because of the adrenaline,” Hansen said with a laugh. “I am really happy with the results.”

Not only did both girls come back with mementos and memories from their once-in-a-lifetime adventure, but they returned with a greater appreciation of cultural differences.

“To see the way we were treated while we were there and how generous other people can be was eye-opening,” McCann said. “I hope to bring that back to our society in order to make a positive impact here.”