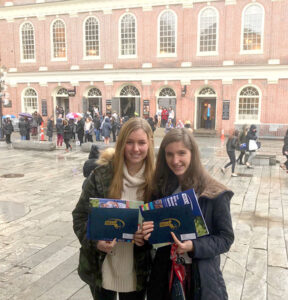 There is a timeless saying older people remark to those from subsequent generations: “You don’t know how good you have it.” For Hopkinton High School seniors Alyssa McIntire and Schuyler Gooley, it’s a cliche they are more apt to believe after taking part in Massachusetts Girls and Women in Sport Day, a speaking program presented by the Massachusetts Interscholastic Athletic Association (MIAA) earlier this month.

“It was really inspiring,” McIntire said. “I would say it made me appreciate the opportunities that girls have in sports now because, even though in my lifetime I have had them, it hasn’t always been like that. We can’t take for granted the privileges we have today.”

McIntire has been a standout field hockey and softball player for the Hillers while Gooley continues to smash records in cross country and track and field. The pair have benefited from top notch facilities at HHS and supportive friends, families and coaches who have helped foster their love of sports, and they said it was eye-opening to realize it had not always been that way for girls and women who wanted to compete.

“I learned that a long time ago women couldn’t do sports and they’d be told the only reason they couldn’t do sports is ‘because you’re a girl,’ ” Gooley said. “They didn’t have the same facilities that boys do, and I thought if I were in their position I would be angry.”

The two-hour program on Feb. 7 was held at Boston’s Faneuil Hall and co-sponsored by the MIAA and New Agenda: Northeast.

The keynote speaker, Laney Clement-Holbrook, has worked at Oliver Ames since 1975, teaching health, physical education, science and biology until retiring in 2011. She was the school’s freshman field hockey coach and softball coach until 1982 and has led the girls basketball program since 1976. She is the winningest girls coach in state history and coached in the McDonald’s All-American game in 2017.

“She had some interesting stories,” McIntire said. “She talked about how when she was younger she was mostly influenced by boys. She watched her brothers play football and she asked her dad if she could play and the answer was always ‘No.’ It’s nice to hear how times have changed.”

Both young women left the event appreciative of the way sports have impacted their lives in a positive way and grateful for the women who have served as inspirations for their own careers.

“Sports have taught me to push through a lot of things,” Gooley said. “Running is one thing where your performance is reflected in your training. If you’re putting in the work in practice, you’ll most likely see a steady improvement.”

McIntire said her former field hockey coach, Joan Bannon, was a role model for her.

“She is still very active and runs marathons, she practices what she preaches,” McIntire said. “It’s inspiring because she can still do it.”

Gooley plans to continue her running career at Cal Poly. After listening to the stories of women who have blazed an athletic trail before her, she said she would encourage girls and women to speak up if they feel they are not getting equal facilities or opportunities relative to their male classmates.

McIntire, who is undecided on a college choice, said her advice to younger athletes would be “stick with it and just play.”

“Even if you’re afraid of being cut or not being good enough, you have the opportunity so you might as well take advantage of it and have some fun,” she said. “You won’t know unless you try.”