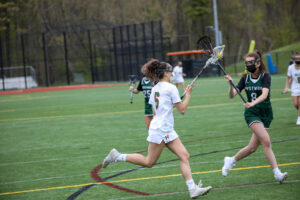 Senior Lillian York, one of the team’s captains, is a standout on attack for the Hillers. PHOTO/JOHN CARDILLO

It’s been a long two years for Hopkinton High School girls lacrosse coach Katelyn Barry and her team. The Hillers held out hope last spring that they would be able to squeeze in some form of a season despite the onset of the COVID-19 pandemic.

The more they heard about what was going on, the less likely a season seemed. Ultimately, no spring sports launched in 2020 in the Bay State. Hopkinton lost out on a season but did gain some perspective.

“It was these waves of emotion, of really understanding how valuable a team is and how we all really missed being together,” Barry said. “This year, everyone has been so happy to be around one another, it’s really endearing.”

The Hillers will play 15 games this year, nearly the amount they would play in a normal season. Two weeks in, Barry said the energy was high and the girls have been having fun. But Barry is not lowering the bar of expectations either, saying that one of Hopkinton’s goals this year will be to compete with the likes of Westwood, Medway and Medfield, some of the stronger teams in the Tri-Valley League.

The team returns eight seniors with varsity experience from 2019 as well as a pair of juniors. The older players will combine with a deep sophomore class that Barry extolled for having a “remarkable” skill level.

“It’s been fun to mesh these veterans with these very talented sophomores,” the coach said.

A trio of seniors slated to play college lacrosse will lead the way this spring. Tiffany Mikulis is a captain who will play for Haverford College next year and will anchor the midfield for the Hillers this spring. Lillian York is going to play at St. Lawrence. Another captain, she is on the attack for Hopkinton.

Julianna Lucas will start in goal. The RPI-bound senior brings athleticism and experience to the vital position.

“It’s great to have that talent spread out — an attack, a midfielder and a defender,” Barry said. “We have some other strong seniors who have been playing for a while, so I am looking for them to be great.”

There will not be much time to waste when it comes to going from having a year off to being in midseason form. The 15-game schedule is packed into barely a month-and-a-half due to the season starting later than it normally would.

Hopkinton, which opened the season with a 1-2 mark, is hoping to be among the top teams in the TVL and be in a strong position come tournament time. This year, all spring teams will be eligible for postseason play.

More than anything, though, the season has brought a welcome return for the Hillers to the team and the sport they enjoy so much.

“Everyone is happy to be here and happy to be playing lacrosse,” Barry said. “It’s a great bonding experience for everyone. They are able to be a part of something bigger than themselves that brings everyone together.”