Independent Thoughts: Memorial Day could be start of new beginning 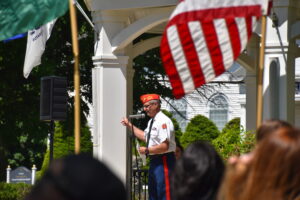 Memorial Day, which is May 31 this year, is a time to look back, to honor those who lost their lives protecting this country. For Mike Whalen, who organizes the Hopkinton activities, he hopes it’s also a time to look ahead.

“I’d like it to be almost a coming-out party for the town to kick this [COVID-19] virus, and for people to get back to having a nice, normal summer,” Whalen said. “I think a lot of people are anxious to return to our normal life for sure.”

Per usual, the day will start with a 9:45 a.m. ceremony at Evergreen Cemetery in Woodville. Around 10:30 there will be a ceremony at the two cemeteries on Mayhew Street, which will include the participation of local clergy, students and Scouts, Whalen said.

The day will conclude with the ceremony at the Town Common, starting around 11:15 a.m. and concluding with the flag being raised from half-mast to the top around noontime. Among those expected to attend are members of the Select Board and state Rep. Carolyn Dykema.

One noticeable absence is the parade, which in the past has featured fire trucks, vintage military vehicles, the Hopkinton High School band and local Boy Scouts and Girl Scouts. Whalen said he spoke to organizers from other towns as well as the Scouts and decided it was better to skip the parade this year.

“Everything else will be the same,” he said. “Ahead of Memorial Day we will [place flags at] all the cemeteries in town with the aid of the Scouts.”

Another sign of normalcy was the return of the monthly Veterans Breakfast at the Senior Center earlier this month. That provided veterans an opportunity to gather in a social setting for the first time since last year, when a few breakfasts were held at the Town Common.

Whalen said there are about 500 residents who identified themselves as veterans in the most recent census, although he said a number of them are individuals who moved here to live in retirement facilities and are not as visible.

He said 2020 was especially tough for veterans, who could not attend memorial services to show support for fellow vets who passed away during the pandemic.

“A year ago we couldn’t even pay our last respects to some of the veterans during a time when absolutely no services were allowed,” he said. “We were able to attend some of the wakes and funerals for veterans who died this year. We were glad to do that.”

The tragic Mikyala Miller situation led to a number of residents reaching out with questions about the way our newspaper collects and presents information.

A few people asked about the Police Log, as there was no record in recent logs of the confrontation the Hopkinton High School sophomore had with some fellow teenagers the weekend Miller died. There also was no mention in the log of the jogger reporting the discovery of the teen’s body on April 18.

The Hopkinton Police Department releases an official police log, which is available to the public (the HPD’s Twitter page has links). The Independent rewrites the official log into a more easily understood wrap-up. Only the most minor items are omitted. We run our full version on our website each week, and a condensed version in each edition of the paper.

It should be noted that the police leave out items from their log on occasion, most notably calls that deal with minors and domestic issues. So the fact that there was nothing about Mikayla Miller in the log is consistent with how the police have handled similar issues in the past.

A couple of readers also questioned why we did not have more information on the situation in our last issue. That’s because the Independent is put together a full week in advance. We make some updates for a day or two after that, but the paper was at the printer by the time the news broke that the family and supporters were planning a rally on the Town Common.

We encourage readers to check our website for more up-to-date and complete coverage of this and all news stories.

The Hopkinton Chamber of Commerce’s inaugural Restaurant Week — which we wrote about in our last issue — kicked off last weekend and ends this Friday. Kudos to the chamber for putting together a town-bonding event, just what Hopkinton needed.

Individuals who dine at one of the participating establishments (check hopchamber.com for details) will be entered into a raffle for a $50 gift certificate. Thanks to support from local businesses, the chamber was able to purchase dozens of gift certificates to give away.

The hope is that this event will serve as a jump-start for the restaurants to get back to business as usual.