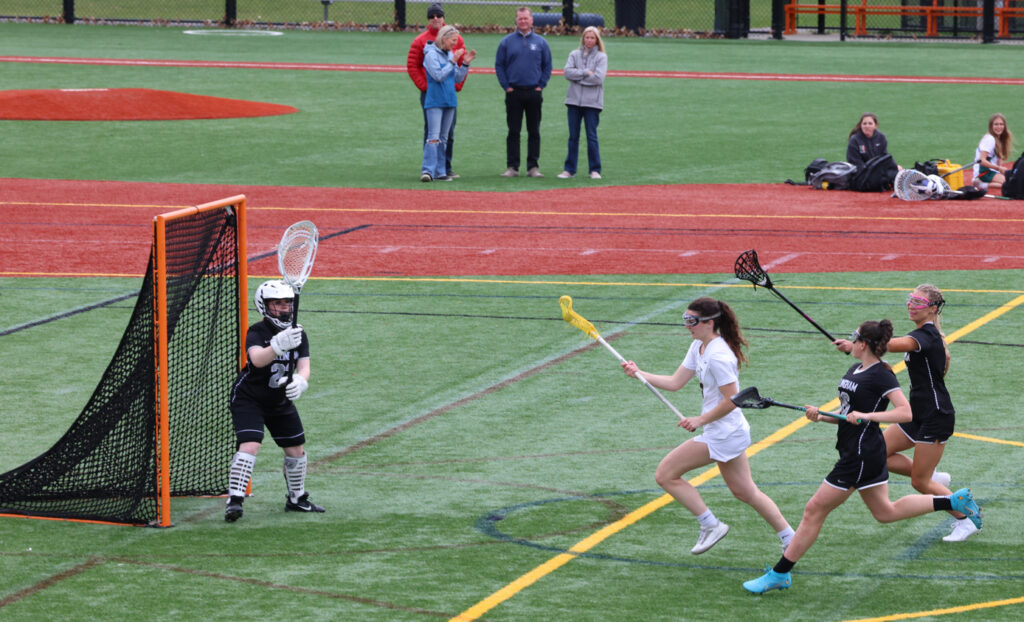 Junior Michaela Scannevin heads toward the net during a game against Bellingham. PHOTO/JOHN CARDILLO

This season might not be remembered for the number of victories the Hopkinton High School girls lacrosse team earned, but coach Katelyn Barry said the Hillers are having fun while battling a tough schedule and setting the stage for success to come.

“This is the first season in a while when we haven’t had a winning record, but it shows there is so much more than winning or losing in a season,” Barry said. “The girls are having a lot of fun, they are doing really well and there is a lot of improvement, it just took us some time to get all the pieces in place.”

Barry noted not only the stiff competition in the Tri-Valley League but also some of the non-league games against teams like Foxboro, Norwell and Natick that filled the slate this spring.

“It was a really hard schedule,” Barry said. “Everything is a game now, nothing is a guaranteed win.”

While neither the Hillers nor any other team could count on a victory day in and day out, Hopkinton has been able to rely on its trio of captains: seniors Jessie Ianelli and Acadia MacDonald and junior Michaela Scannevin.

Ianelli has been with the program since her freshman year and has anchored the defensive unit this spring, finishing among the team leaders in ground balls, a key “hustle” statistic.

“Defenders sometimes don’t get a ton of recognition because they don’t get a ton of stats, but she is one of our leaders in both ground balls and forced turnovers and she does a great job leading by example on the field,” Barry said. “She is also kind and respectful and caring and she works so hard.”

MacDonald is another experienced player who Barry described as “the voice of the team.”

“She is always pepping everyone up and getting everyone excited,” the coach said, going on to praise the senior leadership provided by Meg McCarron and Elizabeth Liu.

“We have a big junior class, so having that leadership has been good for the culture,” Barry said.

Scannevin, the junior captain, has been a leader in a deep class of 2023 and has played well this season despite battling a nagging injury.

“She has shown up every game ready to work and she is a super hard worker,” Barry said, adding that Scannevin is hoping to continue her lacrosse career at the collegiate level.

Junior midfielder Emma Dacey has already committed to UConn, and several other juniors emerged as standouts this spring, including Emily Hayward and Sinead Herr in the midfield, Jaymie Arena on the attack, and Marissa Smith in goal.

“They are a really talented group of kids,” Barry said.

This spring allowed that junior class to come into its own after playing a shortened campaign last year and missing out on its freshman season altogether. The group, many of whom have been playing together since the third grade, joined the program as eighth-graders under a waiver back in the spring of 2019.

“They are a very dedicated and driven group of players,” Barry said. “They love lacrosse, they love playing together, and they work really hard.”