Hillers boys lax gets program back on track 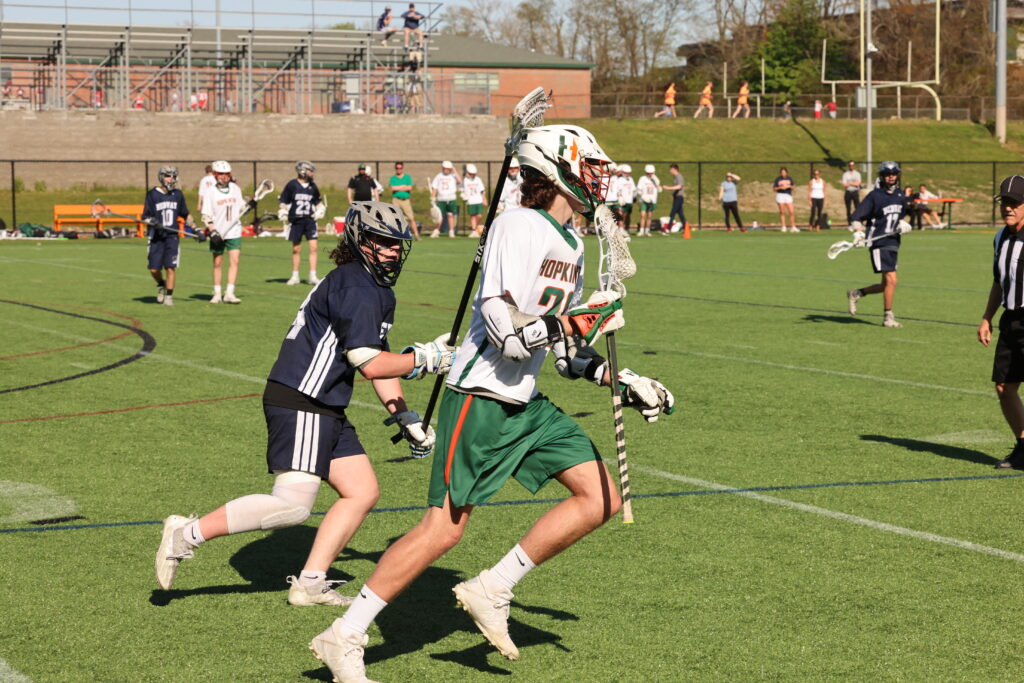 Senior Rowan Gould carries the ball during a game against Medway. PHOTO/JOHN CARDILLO

The Hopkinton High School boys lacrosse team has gone through some ups and downs this season, but coach Dan Norton said the spring has marked the program getting back to normal after a pair of pandemic-affected campaigns.

“We have a lot of guys getting valuable experience this year,” Norton said. “This is a young team, but it’s gotten better throughout the year.”

As with any young roster, having quality senior leadership has been key. Senior attacker Owen MacDonald is the most experienced player on the field, and Norton said he has done a good job setting a stellar example for his younger teammates.

“He came in freshman year towards the end of the year and he started to get some valuable minutes of run and had a couple of goals in both of our playoff games that season,” the coach said. “He really came on strong at the end of the year.”

The next season was scrapped due to the pandemic, but MacDonald bounced back with an all-star caliber performance as a junior and has repeated that level of play this year.

“He is scoring a ton of goals and doing a great job,” Norton said. “In a couple of our wins, he really put the team on his back.”

Sophomore Logan DelPonte also has boosted the attack. In the midfield, Norton said junior Luke Beaudet has taken the reins. Sophomores Wyatt Iantosca and Jack Provencher have been two of the top defenders for the Hillers.

“We are heading back in the right direction thanks to the leadership we had this year of that senior class,” Norton said. “Even though they were a small class, they helped lead a truly very young team in terms of practice habits and game habits.”

Added Norton: “We are really excited again about this program, we have some solid young players and some good depth in our younger classes.”

The group has allowed Hopkinton to, in Norton’s words, “get our culture of hard work back.”

“COVID took a big hit out of the last two years for everybody across the state, so we are trying to recapture normalcy within the season,” he said. “I think it’s gone well. We have learned a lot and I think this team has constantly improved each game and each practice.”

The emphasis on learning and growing impacted Norton’s decision not to schedule as many non-league games as Hopkinton has in the past, which allowed the team more time to practice after a canceled season and then a shortened campaign. The results have been positive, he said.

“We have a lot of young guys, and the last couple of years we have not had much practice time,” Norton said. “So I think it definitely helped.”