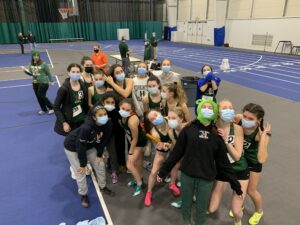 Members of the HHS girls track team pose for a group photo at a recent meet.

The Hopkinton High School girls indoor track and field team navigated more than just the traditional hurdles placed in its way during this pandemic-altered season, but pushed through to a perfect dual meet record and numerous strong individual performances.

“The girls have been great,” coach Jean Cann said. “It’s been a little tricky, especially for the kids doing the more technical events.”

The season was paused occasionally when HHS shifted to all-remote learning or another school had a similar issue.

“With distance runners, you can tell them, ‘Go do a hill workout,’ ” Cann said. “For someone doing the high jump, it’s not like they have a high jump mat at home, or a shot put. They can do some lifting and exercise, but they are not getting the instruction they normally would.”

Among the bigger challenges for Cann and the rest of the coaching staff has been getting everyone a chance to compete. The Hillers have more than 110 athletes between the boys and girls teams — slightly lower numbers than normal — but only 30 are allowed to take part in meets due to COVID-19 restrictions. Those who have gotten their chance have made the most of it.

Senior Hailey Tolson was undefeated in the 55-meter dash and secured a win in the 300 in a meet against Medfield.

“That is a newer event for her, but she did really well,” Cann said. “We knew that was going to be our closest meet and it could have gone either way. They had the top returning sprinter in the league. We were hoping Hailey could win one of those events, and she got them both.

Junior Grace Joy has been another standout for the Hillers. She earned wins in both the mile and the 1,000. Katie Callery, a junior, and Autumn Tumbleton, a sophomore, also were consistent point scorers for Hopkinton this winter.

Junior Kate Powers swept every dual meet in the shot put despite throwing with her non-dominant left hand after requiring surgery on her right arm in late November.

Senior distance running star Olivia Jones also suffered an injury in the fall and was able to come back and earn first-place finishes during the winter season.

“It was helpful for us to get her back,” Cann said. “Olivia, even not at her best, can still win a race.”

Sophomore Ellie Driscoll has emerged as one of the better hurdlers in the state and won all but one race this winter. She is an example of someone competing in a more “technical” event who has had to deal with not having the same level of event-specific instruction and training during the season.

“She is doing a ton on her own and doing everything she can to improve, even without hurdles,” Cann said.

Senior Catherine Dacey has the distinction of competing in perhaps the toughest race to run with a mask, the 600.

“In the distance races you have some time to slow down a bit and the sprints are over quickly,” Cann said. “The 600 is just long enough that you are really breathing hard but you also don’t get to relax. It’s impressive how well she has done.”

Dacey and some of her teammates would have good cause to be frustrated about the masks, restrictions, limitations, and interruptions to their season. But Cann said she has not experienced any of those negative emotions among her athletes.

“I think they are happy to have a season, whether it’s a typical season or not,” she said. “They don’t complain, they are following the rules, and they encourage the younger athletes. They are making the best of it.”