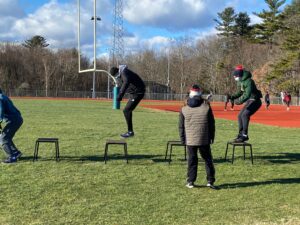 The indoor track team has had to take much of its training outside this winter.

Instead of going to large meets with over 1,000 competitors, his athletes have been competing against only a few dozen others and are herded into the facilities in small groups when their event is called. The Hillers’ indoor facility is partially dotted with desks and classroom supplies moved to allow for more social distancing, so practices have been pushed outdoors.

But through the logistical challenges, Donahue said some lessons learned during this COVID-19 impacted season may end up sticking with the program even when things return to normal. Practices this year are less segmented because of the time and space constraints, and having more coaches look at the same athletes has been beneficial.

“I think we are getting more dynamic with our workouts because we are adding things that we wouldn’t normally add in for our athletes,” Donahue said. “There are kids we thought were jumpers who might now look like better throwers. Because we have kids working with all of the coaches, everybody gets to look at them through their own lens.”

Donahue hopes this will prevent certain athletes from being pigeon-holed, especially younger athletes who might be new to the sport and need some time to figure out where their talents lie.

Another lasting change is, weather permitting, going outdoors for workouts.

“We have a great indoor facility, but I think we rely on it too much,” Donahue said. “I believe there is a lot to be gained by using the big track outdoors. Over time, we stopped using it. When you have bad winters, you get used to being inside. But going back outdoors reminded us there are excellent drills you can do outside.”

One example he cited: “You cannot run hills inside, but you can do them outside.”

The short-term results from the more “holistic” training and practice have been promising. Donahue has been pleasantly surprised with the overall level of fitness for his team, and some school records have fallen during the shortened season.

Senior captain Harrison Prucher broke the school record in the high hurdles during a January meet, only to see it bettered by his own teammate, sophomore Sean Golembiewski.

“We have never had two guys who have been even close to being this fast,” Donahue said, noting that in any other year, sophomore Declan Mick probably would be the fastest hurdler on the team.

Senior Ethan Champlin has one of the fastest dash times in the state and is part of a strong corps of high jumpers, having cleared 6 feet. Senior Tommy Bernardin is another 6-foot jumper, Golembiewski is nearing that mark and freshman James MacCarthy has cleared 5 feet, 6 inches. Donahue calls it “the best high jump group we have ever had.”

Senior Adan Rowell has been strong in the sprinting events, and sophomore Wyatt Ruff might be the team’s biggest surprise in the 600, running in 1 minute, 30 seconds flat.

“This is his first year doing indoor track,” Donahue said. “A lot of the guys, we knew who they were walking through the door. That is a legit time for a young guy like that.”

Senior Nick Brown, the MVP of the Hillers’ Tri-Valley League pod during the cross country season, has been predictably strong in the mile and the 2-mile. Aidan Morin, another senior captain, had the longest shot put throw in the league through late January at 41 feet, 4 inches. Junior Riley Finnegan has been nearing 40 feet in that event.

With the high end talent and depth, it’s no surprise that the Hillers have been unbeaten in their dual meet campaign. Donahue could not help but wonder how good this team could be if it had a full season and a postseason.

“The performances have been excellent,” he said. “I would not have expected this level based on the lack of practice time and not having as many meets, but our kids are excelling.”

And, the coach added, they are having fun during what is one of the more “normal” times of their day.

“You can’t tell under the masks,” Donahue said, “but they are smiling and having a great time.”