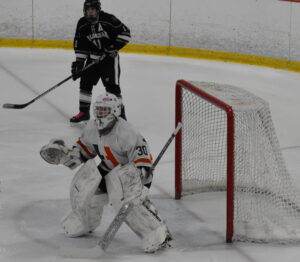 Senior Gray Bailey has been stingy between the pipes for the Hillers, allowing fewer than two goals per game through the first month of the season.
FILE PHOTO/JERRY SPAR

The Hopkinton High School hockey team returned to the ice this season with several goals in mind after coming up just short in bids for a league and state title last winter.

The Hillers are looking to build on some of the lessons learned during a run to the state final a year ago and take another step forward this season.

“They are a hungry group, I can tell you that,” said coach Chris MacPherson.

The drive has shown in the early results. Hopkinton won its first seven games of the season and captured the MetroWest Daily News Cup, another title that eluded the team a year ago. The Hillers rolled to a pair of victories in the winter break tournament, beating Hudson and Algonquin by a combined score of 13-3.

“The hunger showed, we wanted to get the Daily News Cup back,” MacPherson said, noting that Hopkinton won that crown along with the Tri-Valley League title two years ago.

“Now we are back into league play and we know every point counts in the league,” the coach said. “That’s the next step for the guys, they are hungry to get the TVL title. Once that comes, if it comes, then we can turn the page to the state tournament.”

The Hillers’ 7-0 start included five league wins. Two of those victories came against Division 2 foes, one division above where Hopkinton competes, in Medfield and Westwood.

Hopkinton came into the season with high expectations and an experienced roster. The first line of seniors Sean Walsh, Kyle Rogers and Tommy Hamblet has been difficult for opponents to contain, MacPherson said. Freshman Pavit Mehra has added an offensive spark, recording a hat trick against Algonquin in the final of the Daily News Cup on Jan. 1.

The Hillers brought back plenty of experience on the blue line as well. Juniors Andrew Gilbert and Ronnie Shamus and senior Drew Saporoschetz have all been solid in front of senior goalie Gray Bailey. MacPherson praised Bailey for his play and his “fantastic” goals against average, which through five games was below two.

“I knew that we had some real nice depth on defense and we had a lot of forwards coming back from the state final team, so I knew we would hopefully be able to get a lot of offensive zone time,” MacPherson said. “That has held true. I think our identify is always first to be a strong defensive team and be opportunistic in the offensive zone.”

MacPherson said his goal is to qualify for the sectional tournament and go from there, but he said he knows the team has its eye on the TVL title after winning it two years ago and coming up short last winter.

“Ultimately, we need to focus on the our next game,” he said. “We aren’t looking too far down the road.”

But MacPherson said the experience gained from the past two years, both the successes and the failures, should have his team ready to play its best hockey this season.

“We saw some of that coming through in the Daily News Cup, we were trying to bring some hardware home and every game really does matter,” he said. “In each game in the tournament, we didn’t play our best hockey in the first period and then played fantastic in the second and third periods. I think our experience helps in those tight games that matter.”