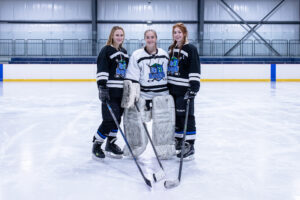 Walking into the locker room for the first time earlier this season, first-year coach Steph Jahnle was not sure what to expect, and she admitted to being a little nervous. Her roster consists of 27 players from six schools: Dover-Sherborn, Hopkinton, Bellingham, Tri-County, Nipmuc and Blackstone Valley Tech.

But the team has been able to gel to the point where the lines between schools are blurred. Three Hillers, captains Kristin McCluskey, Julia MacDonald and Keelan Boyle, have helped lead the way. 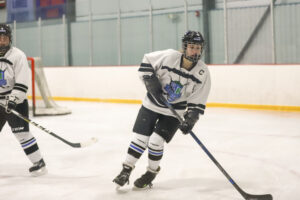 Julia MacDonald was named Player of the Game after leading her team to its first win of the season on Jan. 4.

“I met with them before the season began and I was amazed, they were so organized,” Jahnle said. “They had everything laid out in a binder for me so I knew what was going on. I got really lucky.”

The three have been strong on the ice as well. McCluskey is the starting goalie and has made a number of great saves, even in games where the score has been lopsided. MacDonald earned Player of the Game honors in the team’s first win of the season, doing the dirty work needed to create the winning goal.

Boyle has bounced back from surgery to show herself as one of the squad’s top defensive players. The trio has anchored a team focused on improving throughout the year.

“The first game, I didn’t know what to expect and we came out flat,” Jahnle said. “They didn’t engage. But the next game, it was like a different team. Each period they got better, and now each game they are getting better. It’s part of the confidence that comes with playing with each other.”

The co-op plays under Dover-Sherborn colors, as D-S is the host school. But the roster features a total of 10 Hopkinton players, more than any other school. In addition to the three captains, Sofia Bilodeau, Hailey Cox, Morgan Fraser, Kaley Merkle, Bianca Musgrave, Emerie Peterson and Gillian Wenrich represent the Hillers.

The team lost its first eight games of the season before picking up its first victory. For many of the girls, winning a game was a goal they set and one they were happy to cross off the list.

“It was awesome, the kids were so excited,” Jahnle said. “We have so many kids that a handful can’t dress and a handful do not get much ice time, but they were all still so supportive of the kids that were playing.”

Complicating matters for Jahnle and the coaching staff is the fact that the large roster is limited to only 50 minutes of ice time for practices, leaving Jahnle relying on her assistant coaches and captains to make sure the time is used effectively.

“We break into smaller groups and keep everyone engaged,” she said, adding that she would like to see the team’s skills continue to sharpen as the year progresses.

“I would like to break the puck out cleaner, have the girls looking up and making stick-to-stick passes,” Jahnle said. “I want to see them get a little more creative. They are starting now to drive to the net, so I want to see a little more flow in the offensive zone.”

The first-year coach’s biggest hope is that her players, from a half-dozen schools, all come together to have a positive experience.

“I want these kids to learn something and have fun doing it,” Jahnle said. “And to want to come back next year and play again.”