HHS’ Jones set to run off to Florida 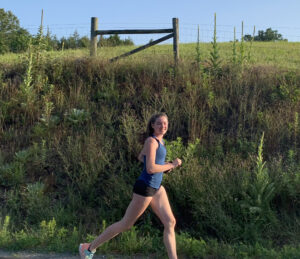 Hopkinton High School senior Olivia Jones will run for the University of Florida next year.

Hopkinton High School senior Olivia Jones was looking for a big school with a thriving athletic program that would allow her to continue her running career and kickstart her professional career in dentistry.

And she found it all in the northern Florida city of Gainesville.

“I am super excited about it,” Jones said, referring to her plans to head to the University of Florida next year.

“I knew I wanted to go to a big school and I love the sports atmosphere,” she added. “There is no better school to go to for sports than a school in the SEC.”

Jones will be a preferred walk-on (recruited but not on an athletic scholarship) with the Gators track and cross country teams. She earned an academic scholarship and has plans to participate in the school’s accelerated dental program, with an eye on eventually attending dental school.

Jones’ path to becoming a Division 1 college athlete was a straightforward one, once she quit field hockey after middle school and focused on running all three seasons.

HHS cross country and track coach Jean Cann said Jones has been a standout since the start of her freshman year.

“Right off the bat she was one of our top runners, coming into what was a strong team already, and she’s only gotten better,” Cann said. “She’s not only a great person but a very hard worker. She was a two-year captain in cross country and was well-liked by everyone on the team.”

Added Cann: “She’s one of those kids who’s just good at everything she does. She’s artistic, she’s musical, and she’s strong academically and athletically.”

Jones has put together an impressive high school running resumé to this point, despite missing out on her junior outdoor track season. She earned wins at the Eastern Massachusetts Division 3 cross country meet in each of the last two years, capturing first place by a wide margin a season ago.

Jones went on to place fourth in Division 1 at the all-state meet. She also earned a top-five finish in the 2-mile at the track and field all-state meet, with a personal best time of under 11 minutes.

This fall, despite battling some knee pain, she earned two wins and two second-place finishes in Hopkinton’s dual meets (the league and state championship meets were canceled). She was hoping to cap her high school cross country career in style this past weekend in the Massachusetts State Track Coaches Association Cup, which was scheduled informally this season.

“It’s our last race of the season so I am hoping to redeem myself,” she said prior to the meet.

With the cross country season completed, Jones said she may take some time off to get back to 100 percent before the track and field campaigns with the Hillers.

Her attention then will turn south. She said she considered several schools, including Florida’s SEC rival Alabama and George Washington, which offered her an athletic scholarship, before finalizing her decision.

She is looking forward to being a Gator and the new environment that awaits her in the Sunshine State.

“There are plenty of nerves involved,” she said. “I have some family in Florida, but no one near Gainesville. It’s going to be so vastly different from everything I have experienced before living in Hopkinton and living in the Northeast, but I am excited to try something new and excited for the sports.”

Jones said her parents, Marisa and Kevin, preferred that she not head out west for college, saying anywhere on the East Coast would be fine.

“Of course I chose the furthest place on the East Coast that I could go,” she joked. “But they are super supportive and excited about it.”