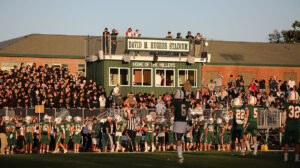 The fans were back Friday night for Hopkinton High School’s football opener, which did not go well for the home team. PHOTO/JOHN CARDILLO

The Hopkinton High School football team had a rough opener Friday night, dropping a 40-6 decision to visiting Wayland. The Hillers’ lone score came late in the game when Robert Litscher threw a touchdown pass to fellow junior Seamus Murphy. Hopkinton trailed 34-0 at the half.

The HHS volleyball team is off to a 2-0 start following Friday’s 3-0 victory at Norwood. Cathryn Leighton recorded 19 assists, two kills and six aces as the Hillers won 25-5, 25-8 and 22-15. Melanie Gildea added nine kills and two aces, Kate Powers had seven kills a block and two aces, and Sam Berenson was a defensive standout with 12 digs. In its opener, HHS swept Medfield on Wednesday.

The boys soccer team is 2-0 following Friday’s 4-0 victory at Norwood. Owen Schnur scored both of the Hillers’ goals, while Sean Golembiewski had two assists. Max Nye recorded the shutout in goal. In their opener on Wednesday, the Hillers blanked Medfield, 2-0. Tora Ito and Andrew Gaughan had the goals, and Schnur picked up an assist.

Girls soccer picked up its first win of the season Friday with a 3-0 decision over visiting Norwood. Georgina Clarke scored the Hillers’ first two goals, and Lexi Trendel knocked home the rebound of a Brooke Birtwistle free kick in the 53rd minute to put the game away. HHS dropped its season opener Wednesday at Medfield, 4-1.

The golf team pulled out a one-stroke victory over host Norwood, 246-247, on Wednesday. Drew Morse shot a 1-over-par 36 to lead the Hillers.

Field hockey opened its season Thursday with a 2-2 tie in the rain against Medfield. Camille Perlov had both of the Hillers’ goals.